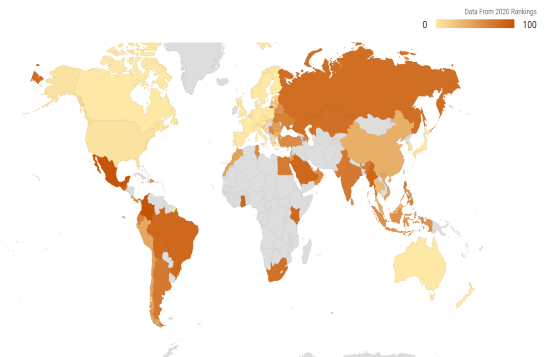 Some Ghanaian online platforms have been quick to run headlines that Ghana is “the 3rd most corrupt country in the world” following an article by an American media company, U.S. News naming Ghana in the “10 most corrupt countries, ranked by perception.”

According to US News, this was the results of a public opinion poll on corruption involving some 73 countries based on a survey of more than 20,000 global citizens.

A subsequent article published by the web-based platform cites Transparency International as a source for the definition of corruption, which has since generated some controversy in Ghana, with the local chapter of the anti-corruption watchdog-Ghana Integrity Initiative(GII) suggesting the corruption ranking is “Fake.”

But does the report, titled “Best Countries 2020 Global rankings, international news and data insights”, exist? And does it really rank Ghana as “the 3rd most corrupt country in the world”?

What is US News’ 2020 Best Countries rankings?

The 2020 Best Countries report is a data and rankings analysis project produced by U.S. News & World Report, BAV Group and the Wharton School of the University of Pennsylvania.

“The intent is to understand how countries are perceived across the world and measure their influence,” director of strategic communications of U.S. News & World Report, Enxhi Myslymi stated in an email interview.

The 10 countries named in the Most Corrupt Countries article are ranked on how a total pool of 73 countries are perceived.

Here is the specific link to the data explorer that outlines scores in corruption for all countries ranked. The complete methodology is also available online and available to the public.

What the report says about Ghana

Ghana is the 3rd most corrupt country out of 73 countries from around the world ranked by perception, according to the U.S. News’ 2020 Best Countries rankings.

U.S. News in an article titled “10 most corrupt countries, ranked by perception” cites Transparency International (T.I) as a source for the definition of corruption and for the proposition that the failure to control corruption is fueling a global crisis in democracy.

However, a statement from the local chapter of the anti-corruption watchdog, Ghana Integrity Initiative (GII) describes the corruption ranking publication as “fake.”

“Transparency International was not used or cited as a source for the rankings for Ghana or any other country evaluated.  This follows typical journalistic practice,” Enxhi Myslymi refuted.

GhanaFact checks show media publications on the subject didn’t attribute the ranking to Transparency international, something the GII in its January 17 statement signed by its executive director, Linda Ofori-Kwafo acknowledges.

Founded as a news magazine in 1933, U.S. News transitioned to primarily web-based publishing in 2010.

So, the labelling of the ranking as “fake” is incorrect.

Meanwhile, GhanaFact has contacted the Ghana Integrity Initiative(GII) for a response and will update this report once we receive one.

How were the countries selected?

Collectively, the 73 countries in the report account for about 95% of global gross domestic product and represent about three-quarters of the world’s population.

“We narrowed the world’s nations down to a statistically manageable group by comparing the performance of countries in a number of key business, economic and quality of life indicators,” US News states.

The 73 countries in the 2020 Best Countries rankings had to meet four criteria within the most recent year for which data are available specific to each benchmark:

Conclusion: Claims that Ghana is the 3rd most corrupt country in the world are incorrect

Media claims that Ghana is the third most corrupt country in the world or most corrupt in Africa are incorrect, and totally misrepresent the findings of the 2020 Best Countries Global rankings considering the sampling methodology.

Also incorrect is the claim that the corruption ranking publication is “fake”.

It is important to note that “survey respondents used their own judgment when evaluating countries”,  and didn’t show evidence of actual corruption.