GhanaFact seeks to promote accuracy in engagements on social media and in public discourse by correcting the spread of false or misleading claims or statements.

The Managing editor has control over the day-to-day editorial decisions of GhanaFact. No other body or source has any influence over our editorial policy & independence.

We select claims to fact-check based on reach, how relevant the claim is to the public and the potential impact the claim might have on the public if it goes unchecked. GhanaFact is only committed to the facts and listen to all relevant stakeholders in executing our fact-check reports.

Each fact-checking report we produce is different, but to ensure fairness, the way we approach all reports is the same. 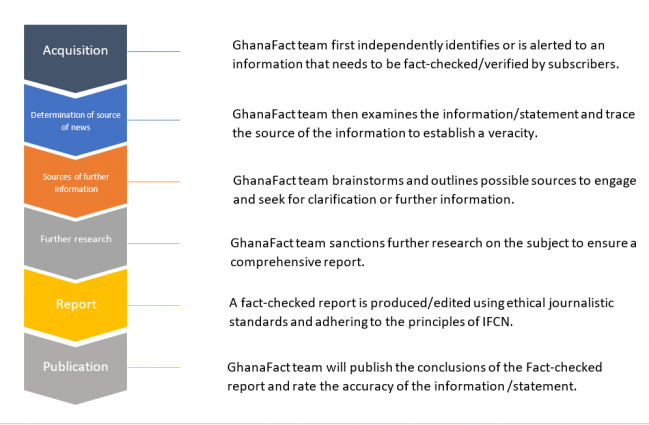 The rating options include:

False: The primary claim(s) of the content are factually inaccurate. This generally corresponds to “false” or “mostly false” ratings on fact-checkers sites.

Mixture: The claim(s) are a mix of accurate and inaccurate content.

True: The primary claim(s) of the content are factually accurate. This generally corresponds to “true” or “mostly true” ratings on fact-checkers sites.

Partly True: The primary claim(s) contains elements of truth but is either not entirely accurate, according to the best evidence publicly available at the time.

Misleading: Elements of the claim are accurate but presented in a way that is misleading.

Satire: The content is posted by a Page or domain that is a known satire publication, or a reasonable person would understand the content to be irony or humour with a social message. It still may benefit from additional context.

Exaggerated: The claim exaggerates the facts.

Understated: The claim understates the facts.

Unproven: Evidence publicly available at this time neither proves nor disproves the statement. More research is needed.