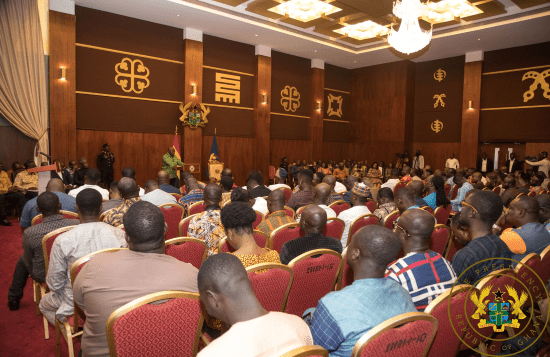 Claims: Five claims about when last the Damba festival was celebrated, Ghana’s growth rate in 2016, comparing Ghana’s deficit in 2016 to 2019, the country’s economic growth rate being one of the fastest in the World and Ghana being the largest recipient of FDI in West Africa.

[ False: The primary claim(s) of the content are factually inaccurate.]

Ghana’s President Nana Addo Dankwa Akufo-Addo on December 13 engaged the media at the seat of government, the Jubilee House to account for his stewardship after three years in office.

The encounter which is the first to be organized in 2019 was to also afford invited journalists the opportunity to question the President on critical issues of national importance.

The two-hour long, two-part session Presidential media encounter started with an apology from the President for failing on his promise to organize such media encounters twice a year.

President Nana Addo in the first hour big-upped his administration and catalogued various achievements chalked by his government across many sectors.

Here is a fact-checked report of some of the President’s claims. We have contacted the Director of Communications at the Presidency, Eugene Arhin for evidence for some of the claims and will update this report once we receive a response.

Claim: Damba festival which had not been done for so many, many, many years

The encounter was streamed live by the verified Facebook account of Ghana’s Ministry of information and has since been viewed 172,000 times, shared 256 times and had 394 comments.

President Nana Addo during his address to the media, [between minutes 4:45-4:55] said:

“The year at least in Dagbon ended with the holding of their famous Damba festival which had not been done for so many, many, many years.”

This is a repeat of a similar claim made by the President in his speech at the Damba festival in Yendi, in Ghana’s Northern region on November 16, which was duly fact-checked as false.

In the recent past, there has only been a four-year break [2002-2006] in the celebration of the most important festival among the Dagbamba, the Damba festival as confirmed by key representatives in the traditional set-up of the Dagbon Kingdom.

The President here was referring to Ghana’s Gross Domestic Product (GDP) in 2016.

The GDP is an estimate of the total value of final goods and services produced in the country over a given period.

The estimation of the GDP is done in stages, with estimates generated at each stage being dependent on available data. Estimates from each stage are progressively designated as provisional, revised and final.

“Economic growth rate has doubled under President Akufo-Addo, rebounding strongly from 3.4 percent in 2016.”

This is again reinforced by the World Bank growth rate figure for Ghana of 3.448 %.

This makes the claim by the President that growth rate in 2016 was 3.6% inaccurate, while the other claim that Ghana recorded the lowest growth in “over a decade and nearly for 2 decades” in 2016 is accurate, hence the rating Mixture.

“And with it has also been a significant improvement in our fiscal stance in the country. A 9.3 deficit has now been turned into a 4.5 deficit.”

Government said the wider deficit was due to newly discovered expenditures and undisclosed arrears at government ministries of around GHS7bn (USD1.6bn).

It should be noted that the International Monetary Fund after concluding a staff visit between February 6-10,2017, in a report stated that “the overall fiscal deficit (on a cash basis) deteriorated to an estimated 9 percent of GDP”

“Over the first nine months of the 2019 fiscal year, provisional fiscal data indicates that the fiscal deficit arising from Government’s fiscal operations was 4.5 percent of GDP on cash basis,” Finance Minister Ken Ofori-Attah said when presenting the 2020 budget [page 30, paragraph 120].

“The basis for comparison is misleading in the sense that the President was comparing the previous government’s deficit figure of 9.3% to a rebased figure. In doing these comparisons we need to compare like for like. The current rebased deficit figure of 4.5% should be compared to a 2016 rebased deficit, which I believe is just above 7%,” Economist and President of CSO-New Era Africa, Bernard Owusu-Mensa stated in an interview with GhanaFact.

The IMF executive board in March completed the last review of the extended credit facility for Ghana and subsequently issued a report that said the 9.3% deficit in 2016 when rebased is 7.3%.

This makes the primary claim by the President misleading or incomplete hence the rating mixture.

Claim: Ghana’s economic growth to be one of the fastest in the world, with 7% average growth over the last 3 years

Our economy is projected to be one of the fastest growing in the world. And over these last three years there has been an average growth of 7%.

The World Bank and the International Monetary Fund (IMF) in the World Economic Outlook report released in April predicted Ghana’s GDP growth rate for 2019 will be 8.8%, which would make Ghana the fastest growing economy in the world.

Presenting the 2020 budget, Finance Minister Ken Ofori-Atta [page 18, paragraph 71] said: “provisional data available on the performance of the economy as at the end of September 2019 show that the targets for most of the macroeconomic indicators have been realized. Overall real GDP grew at an average of 6.2 percent in the first half of 2019.”

Government is targeting overall real GDP growth rate of 7.1 percent for 2019 as captured in the 2019 Budget and 2019 Mid-Year Review budget as compared to the IMF and World Bank target.

Claim: Ghana today is the largest recipient of foreign investment in West Africa

“The claim and I think it is justified that Ghana today is the largest recipient of foreign investment in West Africa is a significant advance for us from a time when investment was low.”

The World Investment Report 2019 released in June by the United Nations Conference on Trade and Development (UNCTAD) notes that “Ghana became the largest FDI recipient in West Africa, even though FDI inflows decreased by 8 per cent to $3 billion.”