Coronavirus: Details about the 6 confirmed cases in Ghana 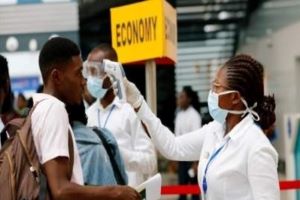 Coronavirus: Details about the 6 confirmed cases in Ghana

Ghana has confirmed four more coronavirus cases within its jurisdiction.

This makes six, the total number of confirmed cases in the West African country.

The first two cases in Ghana were confirmed by the Minister for Health Kwaku Agyeman-Manu on March 12.

In a press briefing to update Ghanaians on the COVID-19 outbreak in Ghana on March 15, the Director of Public Health at the Ghana Health Service (GHS), Dr Badu Sarkodie provided more details about all six confirmed coronavirus cases in Ghana.

“A man resident in Accra who returned to Ghana from a trip in Turkey on the 29th of February this year. He developed symptoms on the 10th of March and reported to a health facility on the same day. He was identified as a suspected case of COVID-19. Sample was taken same day. The Sample was sent to the Noguchi Memorial Institute for Medical Research and within a short while we had the report from the Noguchi confirming that Ghana has confirmed the first case of COVID-19 in the country.”

“He’s a 60-year-old man, a Norwegian who returned to Ghana, Accra on the 6th of March. He Started developing symptoms on the 12th of March and reported to a doctor on the same day. Sample was taken, sent to a laboratory specifically Noguchi Memorial Institute for Medical Research and we received a report later in the day indicating that this is also another confirmed case of COVID-19. The two reports came the same time because the samples were sent, and they were worked on the same time. So, we had simultaneously two confirmed index cases on the 12th of March this year.”

According to the Ghana Health Service, the first two patients showed no symptoms on arrival at the time of crossing Ghana’s borders but later developed acute respiratory illnesses.

“We had evidence of exposure; they had been to areas where cases had been confirmed. Both cases are currently being treated under isolation conditions and the two are stable. Contact tracing has started.” Dr Badu Sarkodie stated.

On Friday, March 13, two more cases in the Ashanti and Greater Accra regions were confirmed as COVID-19.

“The first is a 56-year old man, a Ghanaian who returned from a trip to the United Kingdom on the 4th of March. He stayed in the UK for 10 days and came back. He developed symptoms on the 12th of March and reported to a hospital in Obuasi. The case definition matched the case of suspected COVID. Samples were taken. The sample from this case was sent to the Kumasi Centre for Collaborative Research in Tropical Medicine (KCCR) and within a short time, the lab reported back that they had finished the assessment the report and this is another confirmed case of COVID-19 within the country.”

“A woman(female) and a Ghanaian student. She travelled out to the United State of America. Stayed for 10 days or so. She came back on the 9th of March and then on the 13th of March, she started having symptoms that later were evaluated to be compatible with suspected case of COVID. Samples were taken, sent to Noguchi Memorial Institute for Medical Research, samples were taken on the 13th and the same day we had a report from Noguchi that confirmed this as another confirmed case of COVID-19. Both are currently receiving treatment under isolation conditions and both are stable.”

A dedicated website to update Ghanaians on credible information in relation to the coronavirus outbreak and the latest government announcements has been launched as part of “Ghana’s outbreak response management.”

The Ghana Health Service platform will be updated every six hours with the latest confirmed cases in the country.