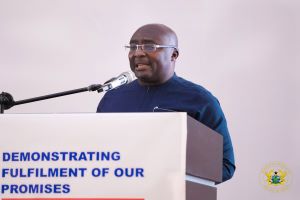 Mixture: The claim is a mix of accurate and inaccurate assertions, or the primary claim is misleading or incomplete.

Ghana’s Vice President Dr Mahamudu Bawumia on February 11 addressed a town hall meeting and results fair in Kumasi in the Ashanti region to defend the track record of the current administration.

The 1-hour 30-minute address was streamed live via the Ministry of Information verified Facebook account and saw the Vice President make several claims about the government’s fulfilment of promises made to Ghanaians leading to the 2016 elections.

Here is part two of our fact-check report verifying four more claims made by Dr Bawumia during his address at the maiden government town hall meeting.

The policy rate is a signalling rate which is supposed to serve as a reference cap for all other rates in the economy.

On the Policy Rate Trends page of the BoG website, one can get an overview of the historical trends in the key policy rate of the Bank of Ghana.

So, this claim is rated true.

In 2019, Ghana was projected to grow by 8.8% by the IMF which would have made the West African country the fastest-growing economy in the world.

“The recent growth performance has been driven mainly by industry and agriculture sectors, the latter particularly reflecting the effect of policy interventions in the sector, most notably the planting for food and jobs. This has resulted in an increase in Agric sector growth from 2.9% in 2016 to 6.8% by 2018 and a projected 6.4% in 2019.”

Data captured in the GSS Rebased 2013-2018 Annual Gross Domestic Product report showed Agric sector growth in 2018 was 4.8% and not 6.8% as suggested by the Vice President.

Ghana’s 2020 Budget Statement and Economic Policy read by Finance Minister Ken Ofori-Atta also projects Agricultural sector growth for 2019 to be 6.9 percent and not 6.4%.

Hence the claim is rated mixture because the content is a mix of accurate and inaccurate assertions.

So, it is curious to know why Dr Mahamudu Bawumia decided to compare 2016, 2017 and 2018 industry growth figures but fails to do same for the service sector.

Without any justification, it is misleading or incomplete to compare the 2016 service sector growth figure to the 5.4% projected growth rate for the sector as mentioned in the 2019 mid-year budget.

So, we rate the claim mixture because the content is a mix of accurate and inaccurate assertions and the primary claim is misleading or incomplete.