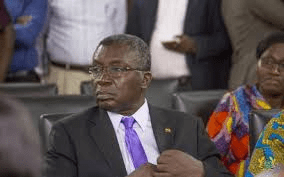 It is “fake, please disregard.”

That is how Ghana’s Ministry of Information has described a press statement alleged to be coming from the seat of government, calling for the arrest of the Minister of Environment, Science, Technology and Innovation Professor Frimpong Boateng and the governing New Patriotic Party (NPP) General Secretary John Boadu.

The February 5 “fake” statement is signed by the Director of Communications at the Presidency Eugene Arhin and has the Presidential seal of the Republic of Ghana embossed on it.

The source of the statement is currently unknown but has been widely circulated on social media including Facebook and WhatsApp and republished by some online portals/blogs.

The Ministry of Information using its verified Facebook page has called on the general public to disregard the statement.

In an interview with GhanaFact the Public Relations Officer at the Ministry of Environment, Science, Technology and Innovation Nasir Ahmad Yartey said,” I can confirm that the minister is at post and that press release was false.”

Ghana’s Minister of Environment, Science, Technology and Innovation Professor Frimpong Boateng has been under immense public pressure following a leaked video in which he could allegedly be heard conniving to engage in illegal mining popularly called “galamsey” to help fund the governing Party(NPP) in the upcoming 2020 polls.

This is despite a recent close to two-year ban of small-scale illegal mining by the government as part of necessary steps to reverse the destruction of water bodies, farmlands and forests cover across the country.

An inter-ministerial task force against illegal mining was set up by the government to help sanitize the country’s mining industry and ensure all mining activities were done in an environmentally friendly and sustainable manner with Professor Frimpong Boateng as Chairman.

About 500 excavators seized as part of the clampdown on illegal mining between January 2017 and December 2018, have since “disappeared”, Professor Frimpong-Boateng revealed recently in an interview on local radio station Joy FM.

The Criminal Investigations Department (CID) of the Ghana Police Service has commenced investigations to unravel the whereabouts of the heavy-duty machines upon a request from the embattled minister.