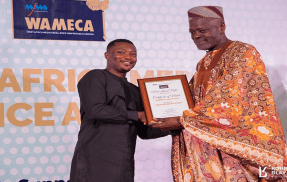 A report by a GhanaFact staff

Nabil Ahmed Rufai beat competition from two Burkina Faso journalists in that category and according to the judges, Nabil’s story,‘Educating The Poor’ stood out among the other entries.

The story highlighted the poor conditions pupils of a rural community in the Upper East region of Ghana endure while pursuing education.

Nabil through his report was able to get an NGO, McDan Foundation to build an 8-unit classroom facility for the pupils of the Teong Primary school who previously sat on the bare floor under a tree to take their lessons.

He worked on the story while with GHOne TV, a local station in Ghana.

According to organizers of the awards, Media Foundation for West Africa , the awards scheme received 724 entries from over 15 countries in West Africa and following a thorough review of the entries, a 5-member Jury shortlisted 21 finalists from six countries.