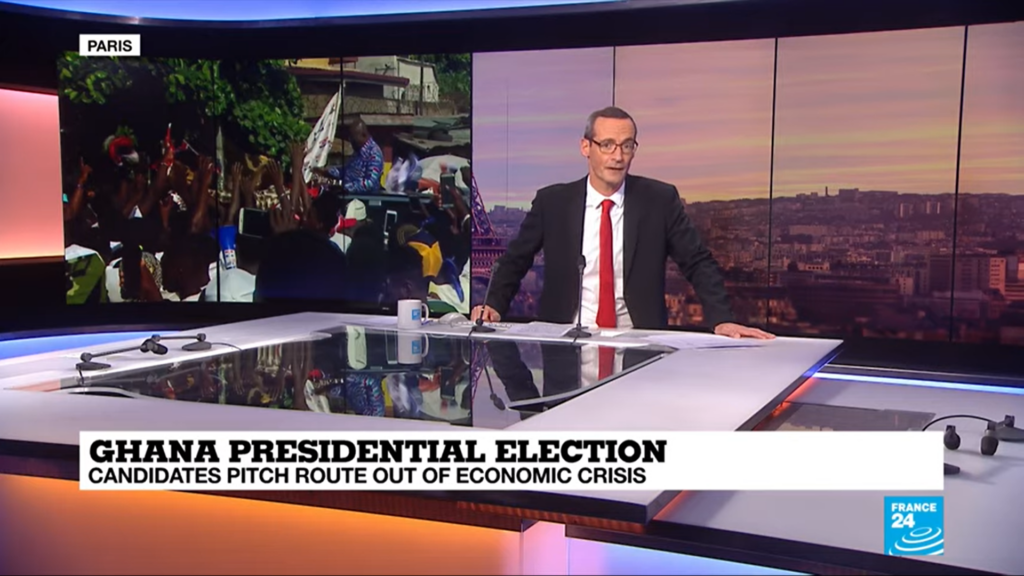 Verdict: One false, one partly true.

French state-owned international news channel, France 24, as part of its coverage of  Ghana’s presidential and parliamentary elections has made a number of claims about Ghana’s economy and poverty levels.

In a video report on December 7, the Paris-based network discussed the chances of the two leading presidential contenders and factors that may influence voters in one of Africa’s most stable democracies.

The presidential election has since been called for incumbent Nana Akufo-Addo. But his predecessor and main contender, John Mahama has rejected the outcome of the polls, describing it as “flawed.”

The news report was published on the verified YouTube channel of France 24 which has more than 1.5 million subscribers and has since been viewed more than 17,000 times.

France 24 news anchor before crossing over to get updates on the election from the correspondent in Ghana, partly said in his introduction that:“…the President and a former President are both offering promises to help the economy rebound from its first quarterly contraction in nearly 40 years.”

Ghana’s 3.2 percent economic contraction in the second quarter of 2020 was the first time in four years and not 40 years, data from the Ghana Statistical Service show.

In September, GhanaFact flagged a similar claim that the negative quarterly growth(Q 2) was the first time in 37 years.

Meanwhile, for a second straight quarter, Ghana’s economy declined by 1.1% in the third quarter despite the easing of restrictions imposed to curb the spread of COVID-19.

The claim that Ghana recorded its first quarterly contraction(Q2) in nearly 40 years is false.

France 24 Correspondent Sam Bradpiece in his report from Ghana partly said: “If you look at the national poverty rate, according to the latest government figures, we are talking of about 23 percent…There are stark regional inequalities. If you look at somewhere like Accra, the poverty rate here is only about 2 percent whereas if you go to the Northern regions we are going almost into the 40s…”

Based on information about basic needs collected from 15 low-income countries, the World Bank defines the extreme poor as those living on less than $1.90 a day.

The Ghana Statistical Service (GSS) also defines extreme poverty incidence as the state where the standard of living is insufficient to meet the basic nutritional requirements of the household even if they devote their entire consumption budget to food.

About 23.4 percent of Ghana’s population fall below the poverty line as contained in the 2016/17 edition of the Ghana Living Standards Survey Round 7 (GLSS 7).

Since 1987, the Ghana Statistical Service (GSS) has been conducting the Ghana Living Standards Survey (GLSS) with the aim of measuring the living conditions and well-being of the population.

On the other hand, the incidence of poverty in the Northern, Upper East, and Upper West Regions have been consistently higher than the national average since 2005/06. The average poverty incidence for the three regions stands at 62.26%.

“The next survey will study the dynamics of poverty in the northern part of the country to help government address the inequalities,” Head of Statistics at the GSS, Anthony Krakah told GhanaFact in an interview.

The claim that the poverty rate in the Northern part of Ghana is worse compared to Accra is partly true even though the percentage rates used are understated.