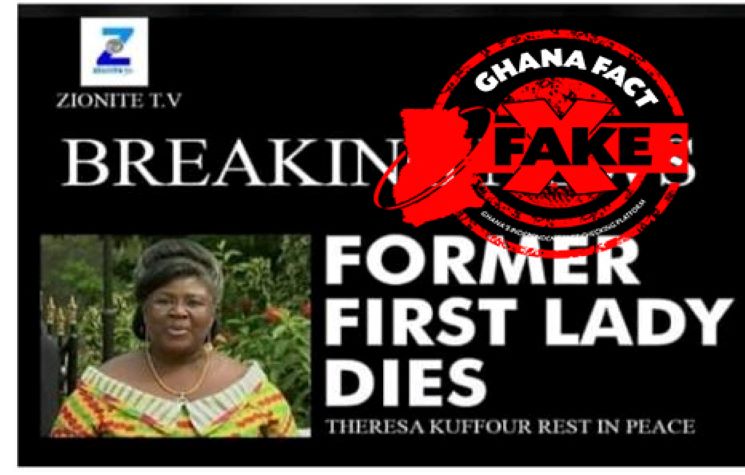 Researched by the GhanaFact Team

Reports about her death were first published on Facebook by Zionite Mass Media (owners of Zionite radio, Zionite TV and Zionite-online) and subsequently widely shared on messaging platform WhatsApp on August 29.

However, the Office of Former President John Kufuor in a statement described the recent reports as “erroneous”, like various well-worn death hoaxes targeted at the former first lady on social media in the last four years.

“She’s old, and to put it bluntly she is not in excellent health…But it is very disheartening that someone is alive and people would peddle untruths about her death,” Senior Aide & Spokesperson for former president John Kufuor, Dr. Kwabena Osei-Adubofour said in an interview with GhanaFact.

Son of the former first lady, Eddie Kufuor was first in the family to respond to the speculation on his Facebook wall at 7:30am on August 30 and said, “PLEASE DISREGARD…. BY GOD’S SPECIAL GRACE, MY MOTHER IS ALIVE & WELL… PRAY FOR MY FAMILY INSTEAD. THANK YOU.”

He posted the message together with the image  published by Zionite Mass Media that said, “Breaking News, Former First Lady Dies. Theresa Kuffour Rest in peace” and had a picture of the former first lady embossed. Eddie Kufuor’s Facebook post has since been shared 115 times and had 252 comments.

In 2015, a similar death hoax about Madam Theresa Kufuor was widely reported on Facebook, although the source of the misinformation was unknown.

The Office of Former President John Kufuor debunked the rumours, with former spokesperson Frank Agyekum saying in an interview on local radio station Okay FM’s “Ade Akye Abia” morning show that, “it is not true and even if there is a rumor, the proper thing is to enquire about it before coming out with such bizarre information.”

Managers of online media platform Zionite Mass Media have since retracted the story and apologized to the former first family.

“We regret the inadvertent error and apologize to the office and to the Kufuor Family at large for any damage or inconvenience the news may have caused,” Zionite Mass Media stated in a rejoinder published on Zioniteonline.com on August 30.

Meanwhile, Office of Former President John Kufuor says it is unaware of the apology and that the media platform could communicate with the office directly if they were truly contrite about the distress caused.

“Then we would do that because it(the apology) was sincere,” managers of Zionite Mass Media stated in an interaction on Facebook Messenger.

The Office of Former President John Kufuor has confirmed a younger sister to the former first lady, Madam Mary Mensah passed away on Thursday morning, August 29.

But Madam Theresa Kufuor was only informed about the death of her sister a week later, on September 6, because of her ill health.

“Initially we were all advised to keep the death from her (Madam Theresa Kufour) but we had to tell her in due course. So, on the day of the one-week celebration we told the former first lady.” Dr. Kwabena Osei-Adubofour said.