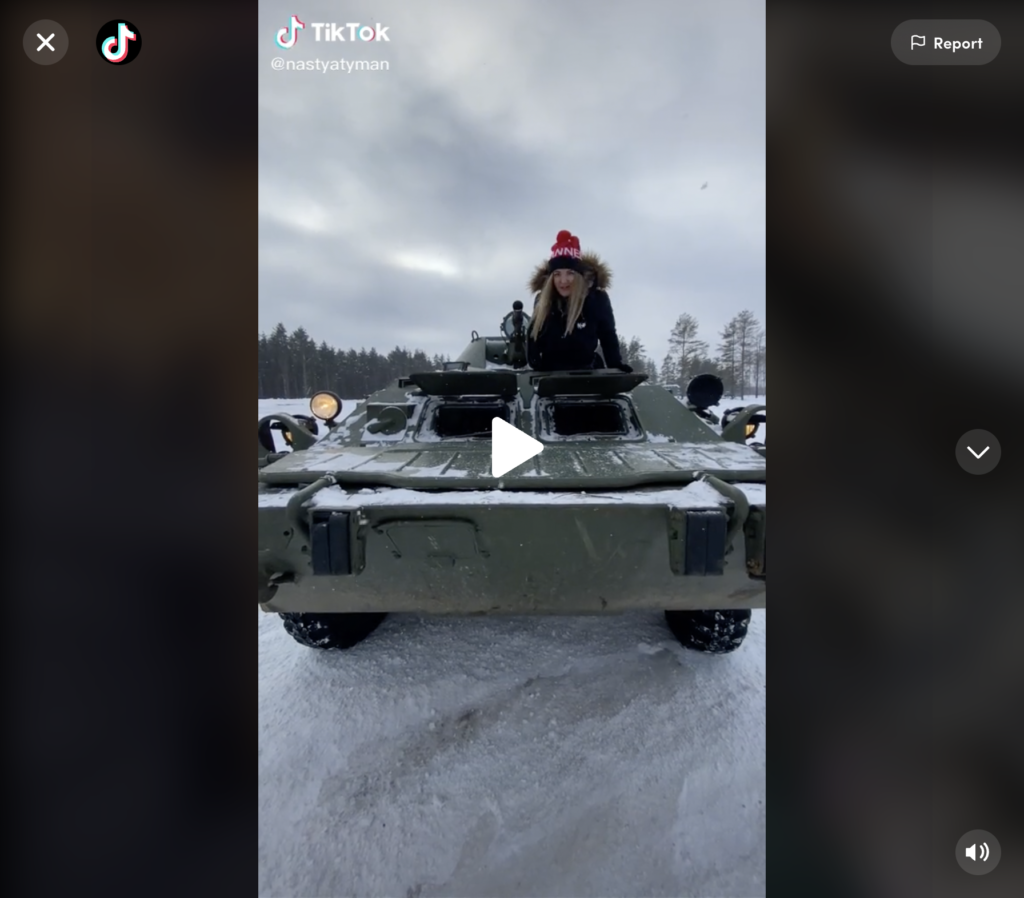 A viral Tiktok video showing a white woman operating a battle tank is being presented as an example of how Ukrainians are driving abandoned or captured Russian military vehicles as the armed conflict between the two countries continues.

The 38 seconds long video clip shared by a Twitter user comes with a caption that partly said: “Ukrainians are uploading videos on TikTok about how to drive abandoned or captured Russian military vehicles.”

The Tweet has generated more than 250,000 interactions and the video was viewed more than 7.3 million times as many social media users continue to look out for any information on the Russian invasion of its neighbouring country, Ukraine – now in its 9th day.

This fact-check report would seek to verify the following:

GhanaFact has found that the viral TikTok video was recorded and posted by a verified Tiktok account – @nastatyman on February 16, 2021, and gathered 2.2milion views when it was first posted – at the time, Russian President Vladimir Putin had not yet declared war on Ukraine.

However, the Tiktok user – @nastayman, on February 28, 2022, reposted the video on her page, 5 days after the armed conflict between Russia and Ukraine started, which has since triggered speculations and people’s interest in the video – now viewed more than 11 million times.

“The girl [in] the video is not Ukrainian. Her name is Nastay Tuman, she is from Volgodonsk, Rostov region of Russia. She is a popular auto-blogger, who is located now in Moscow, Russia,” a fact-checking journalist with Science Feedback, Irina Kulemzina told GhanaFact when we reached out to get some context and a translation of the viral video.

“In the first gear and let’s go! look at this BTR! Almost like GAD. And it’s 8-wheel drive! A saw “friendship is included (in case you got stuck in the woods). It’s bulletproof! Look at its butt! Can fit 12 people. And has a hatch for the driver-mechanic, commando and a seating a shooter. If you want to see how I’m driving it, subscribe and watch the next video,” another fact-checker with Science Feedback, Marina Yurieva said was the translation of what the woman said in the viral video.

Therefore, the viral video has nothing to do with the ongoing conflict between Russia and Ukraine. We rate the claim as MISLEADING because the video is being misrepresented.