FALSE: Ghana’s Prez did not order arrest of 3 foreign contractors for destroying a road 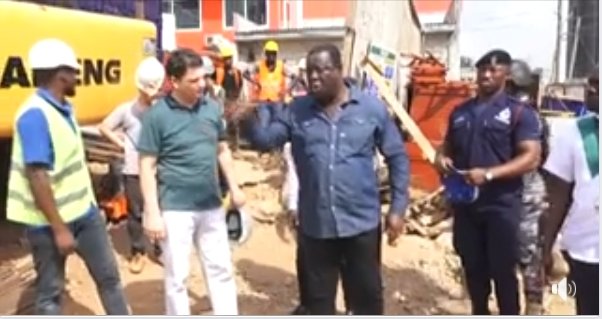 A video of a man confronting three foreigners for destroying portions of a major road to build a 22-storey building is being wrongly portrayed as showing Ghana’s President Nana Akufo-Addo.

The 4 minutes 40 seconds long video rather showing Ghana’s Minister of Roads and Highways, Kwasi Amoako-Atta has garnered 4.8 million views since it was posted on Facebook on February 8, 2020, with the caption: “Ghana president ooo my God I was weak after watching this video, this is the kind of president Africa country need, especially Nigeria … what do you guys think?”

On December 18, 2019, the Minister of Roads and Highways caused the arrest of three foreign nationals for building a concrete barricade on a portion of a road while constructing a 22-storey multi-purpose building.

The ministerial intervention was captured on video and widely reported in the local media (here, here and here).

“The contractor of this property should be arrested immediately. The contractor and all those working here must be arrested immediately. Look at this and you destroy the road. In which country can this be allowed? In your own country can anybody do this?… the owner of this property is not bigger than this country. Even the President of the Republic with all the executive power can’t do this and won’t do this,” Kwasi Amoako-Atta can be partly heard fuming in the video.

According to him, the developers were working without the appropriate permits from local authorities and despite protests from other residents in the area the construction has continued.

The headmistress of Association International School who together with some residents were opposed to the construction secured an interim injunction against the Turkish contractor, but that was dismissed by an Accra High Court presided over by Justice Afua Novisi Aryene later.

On February 10, 2021, local media reported that portions of the 22-storey multipurpose building had caved in, with some of the workers sustaining various degrees of injuries.

The claim that the man seen in the video is Ghana’s President Nana Akufo-Addo is FALSE.