A letter being shared on social media claims Nigeria has banned all Tanker Take Over transactions with off-takers of Bonny Light Crude from Ghana, Lome and Cotonou. Following GhanaFact checks, we found the notice of ban, allegedly issued by the Nigeria National Petroleum Corporation (NNPC) is fake and the claim is false. 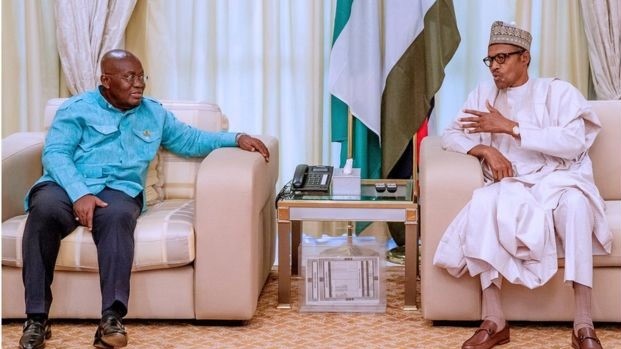 A letter being shared on social media dated August 5, 2020, claims Nigeria through an Executive Order has suspended all Tanker Take Over (TTO) transactions with buyers of its Bonny Light Crude Oil (BLCO) from Ghana, Lome (Togo) and Cotonou (Benin).

The document comes with the headline, “Notice of ban on all Ghana/Lome/Cotonou TTO transactions,” and is written under the letterhead of the Nigerian National Petroleum Corporation (NNPC) and allegedly signed by one Bello Musah Abdullahi, even though the NNPC Group Managing Director is Mele Kyari.

The letter claimed the NNPC had taken notice of frustrations that potential buyers go through in closing deals in Ghana, Lome (Togo) and Cotonou (Benin) ports.

“The corporation had suffered from lots of losses due to sea pirates hijacking vessels, non-performance from buyers after moving vessels to their point of calibration, which has affected the corporation and our country (Nigeria),” it added. 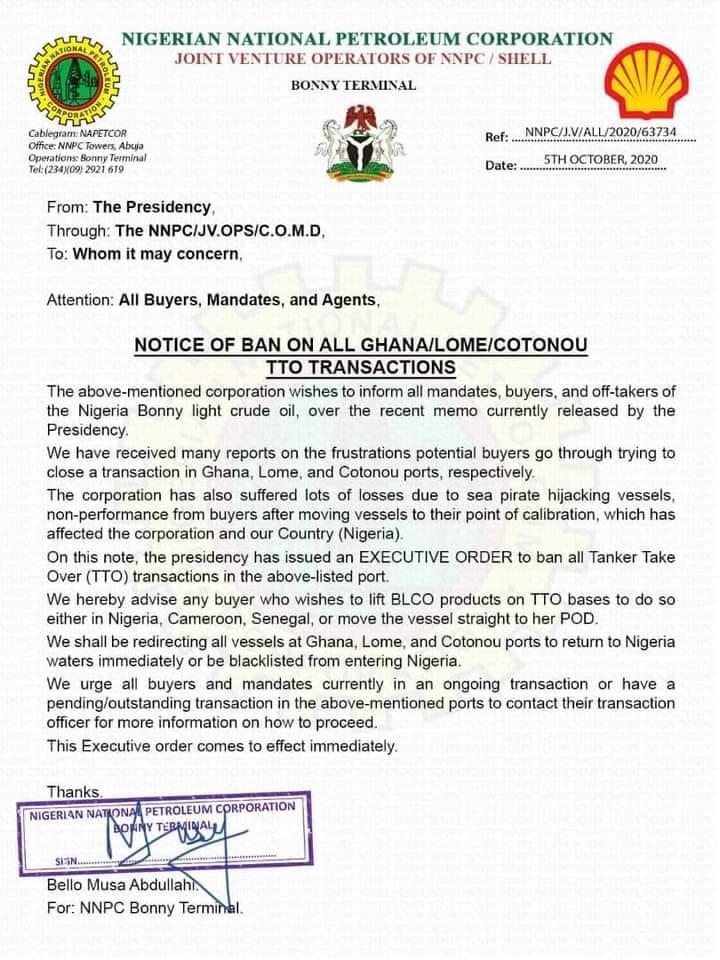 Tanker Take Over (TTO) transaction is a business practice whereby the seller gives the buyer his vessel of oil to go with and returns it later, while the BLCO is a high grade Nigerian crude oil produced in the Niger Delta basin and named after the city of Bonny. It is an important benchmark crude for all West African crude production.

Nigeria lost $2.8 billions of dollars in revenue in 2018 due to oil-related crimes, government data shows.

“The Presidency has issued an Executive Order to ban all Tanker Take Over (TTO) transactions in the above-listed ports,” the letter claimed.

The statement directed potential buyers of the light-sweet crude on TTO arrangements to either lift in Nigeria, Senegal, Cameroun, or move the vessel straight to the point of discharge.

It further directed vessels at the banned ports to return to Nigeria waters or be blacklisted from entering the country.

GhanaFact could not find the letter published on the websites of Nigeria’s Presidency, Ministry of Petroleum Resources, and Nigerian National Petroleum Corporation (NNPC).

Industry players in Accra, such as the Ghana Chamber of Bulk Oil Distributors (CBOD) have seen the letter but raised concerns over its authenticity.

“We believe the letter is not authentic,” Chief Executive of the CBOD Senyo Hosi told GhanaFact.

The Nigerian High Commission in Accra also said it had not received the notice of ban, therefore, could not speak to it.

“We have not been served with any correspondence of such, so therefore we cannot confirm this letter,” Secretary to the High Commissioner Omobola Babafon told GhanaFact in an interview.

A Human Resources Manager at NNPC, Rakiya Abubakar labelled the letter as “fake” when contacted by GhanaFact.

GhanaFact rates the claim as false and the letter as fake.