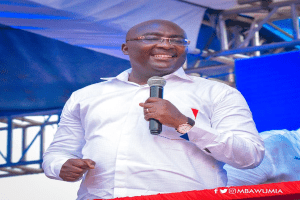 Claims: Two claims about ex-President Kufour being handed a HIPC economy in 2000 and Ghana ranking as one of the fastest growing economies in the world for two years in a row.

Verdict: One ranked true and one mixture

The December 20-22 annual conference was held under the theme, “we have performed better, four more to do” and brought together about 6,500 party officers from constituencies across the country to deliberate and adopt resolutions ahead of Ghana’s 2020 general elections.

Speaking at the 2019 conference, Vice-President Dr. Mahamudu Bawumia catalogued some of the government’s achievements and why Ghanaians should trust the NPP to deliver on all their promises.

Here is a fact-checked report on two claims by the Vice President.

“When President John Agyekum Kufour took over the reins of government in 2000, he was handed a HIPC economy, an economy that could not pay its bills.”

According to the International Monetary Fund (IMF) and International Development Association (IDA), an earlier debt sustainability analysis during the government of President John Rawlings confirmed that Ghana could qualify for assistance under the HIPC Initiative.

The IMF and World Bank backed initiative is aimed at ensuring that no poor country faces a debt burden it cannot manage.

However, ex-President Rawlings’ government decided that it was not in the country’s best interest to pursue debt relief under the Initiative [HIPC Initiative – Preliminary Document, June-2001].

But after the change of government following the 2000 elections, President J.A. Kufuor decided otherwise and instructed Minister of Finance Yaw Osafo – Maafo to take all steps necessary to ensure that Ghana gets the full benefit under the HIPC initiative which meant Ghana received a 3.7billion dollar Debt Service Relief.

This was despite opposition from the Socialist Group, a pressure group led by Kwesi Pratt Jnr. and Dr. Abdul Nasser that said the HIPC initiative by the IMF and World Bank was a means to manipulate the country to suit the interest of the West.

Claim: Ghana is one of the fastest growing economies in the world for two years in a row

“Ghana today is one of the fastest growing economies in the world for two years in a row.”

Ghana was not one of the top three West African countries with the fastest growing economies and across the world was not part of the top 25, World Bank data shows.

According to the Minister of Finance, Ken Ofori-Atta overall real GDP grew at an average of 6.2 percent in the first half of 2019, while growth rate target for the year remains 7.1 percent. This confirms provisional estimates from the GSS (6.7percent in quarter one and 5.7 percent in quarter two).

Meanwhile the World Bank and the International Monetary Fund (IMF) are predicting Ghana will achieve a growth rate of 8.8% in its World Economic Outlook released in April.

Dr. Mahamudu Bawumia’s claim is a mix of accurate and inaccurate content, hence the rating mixture.