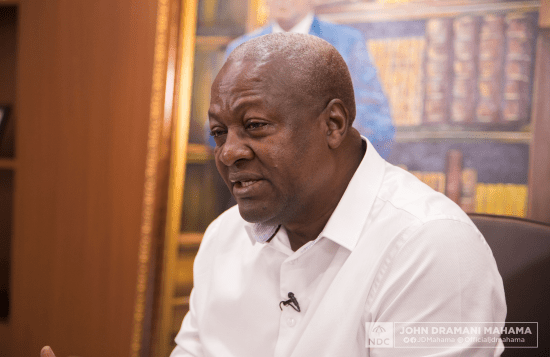 Claims: Four claims about the service sector being the largest sector and fastest growing, IMF warning Ghana is in danger of debt distress, transformed BOST from worst performing state-owned enterprise to best performing and banking sector crisis has led to almost 20,000 job losses

Verdict: One true, one mixture and two not eligible

[Not eligible: The content contains a claim that is not verifiable or has the primary purpose of expressing the opinion or agenda of a political figure.]

Ghana’s former President and leader of the country’s largest opposition party, the National Democratic Congress (NDC) John Mahama as part of efforts to make a case as a viable alternative to the current government heading into the country’s 2020 polls engaged Ghanaians via social media on December 23.

The ex-President responded to a host of questions and tried to proffer solutions to some of the country’s challenges across many areas including unemployment and job creation, education, health and governance.

Here is a fact-checked report on 4 claims made by the ex-President. We have contacted the special aide to the former President, Joyce Bawa Mogtari for evidence for some of the claims and will update this report once we receive a response.

Claim: Service sector has overtaken agric as the largest sector and is the fastest growing

The 1 hour,30-minute interaction was live on John Mahama’s verified facebook account which has more than 1.1 million followers, and has since been viewed by 228,000 people, shared 3,246 times and generated 9,800 comments at the time of filing this report.

“The service sector has overtaken agric as the largest sector and the fastest growing in our economy.”

Minister for finance Ken Ofori-Atta in presenting the 2020 budget confirms that the Services sector occupies the largest share of the economy contributing 46.3% of GDP in 2018.

Between 2005–13, the services sector share of Ghanaian GDP rose from 32.2% to 48.8%, thereby overtaking agriculture as the largest segment of Ghana’s economy, data from the World Bank shows.

With regards whether the service sector is the fastest growing in our economy, current data as captured in the 2020 budget does not support this assertion.

In the first half of 2019, the industry sector is leading with average growth of 7.2 percent, compared with the Services Sector 6.9 percent and Agriculture Sector 2.6 percent for the same period.

So, while the claim by ex-President John Mahama that the Service sector has overtaken agric as the largest sector is true, the subsequent assertion that the service sector is the fastest growing is false. Hence the rating Mixture, which means the content are a mix of accurate and inaccurate.

On June 29,2015, a statement signed by then Chief of Staff, Julius Debrah announced President Mahama’s decision to streamline the operations of the Bulk Oil Storage and Transportation Company (BOST) and the Tema Oil Refinery (TOR).

Subsequently, a 2016 State Owned Enterprise (SOE) annual aggregate report by the Ministry of Finance revealed TOR together with other SOEs recorded consistent losses and could not pay dividend to government.

So, in as much as the claim about BOST being the best performing SOE before NDC handed over power is inaccurate, GhanaFact couldn’t verify the preceding year’s audited books of BOST to ascertain if the organization was the worst performing SOE when the NDC came into government in 2009.

Hence, we rate the statement as not eligible. That is, the content contains a claim that is not verifiable, or has the primary purpose of expressing the opinion or agenda of a political figure.

Claim: IMF says Ghana is one of the countries in danger of debt distress

“the IMF has said that Ghana is one of the countries in danger of debt distress because this government has borrowed at such a rate that they’ve almost doubled the public debts that they inherited from all the past governments.”

A joint World Bank and International Monetary Fund debt sustainability analysis showed that Ghana’s risks of external and overall debt distress continue to be assessed as high as captured in a May 2019 report.

According to the Bank of Ghana summary Economic and Financial Data for November 2019, the country’s public debt stock is 32.9 billion dollars or 208.6 billion cedis (60.3% of GDP).

The total number of banks currently operating as universal banks in Ghana stands at twenty-three (23).

An estimated 3,200 workers lost their jobs following the banking crisis, according to the Industrial and Commercial Workers Union (ICU), though it is difficult to confirm the numbers owing to the opacity in the handling of information in Ghana’s banking sector and general poor information management by government agencies.

Nevertheless, Mr. Ofori Atta, the finance minister, said in the 2019 budget speech, “Deposits of some 11.0 billion cedis have been saved as well as some 2,661 jobs in addition to several hundred(s) saved in 2017 from the insolvent 2 banks.”

These numbers are the closest Ghana has come to finding out about the impact of the reforms and job losses caused by the decision to revoke the licenses of banks.

An independent investigative work by a non-governmental media and policy organization, iWatch Africa said over 6000 people lost direct jobs as a result of the Bank of Ghana (BoG) clean-up of the banking and specialized deposit-taking and non-banking financial institutions sectors.

Hence, we rate the statement as not eligible. That is, the content contains a claim that is not verifiable, or has the primary purpose of expressing the opinion or agenda of a political figure.