In an appearance on syndicated entertainment talk show, The Wendy Williams Show, Lisa Raye McCoy said, “Queen Mother of Ghana, Yeah. And that's really big for what I'm doing now, using my platform for the better me, for creating peace and awareness for education over there. I'm wanna do a small school over there, so I'm doing a lot of educating and stuff now. Yeah.” 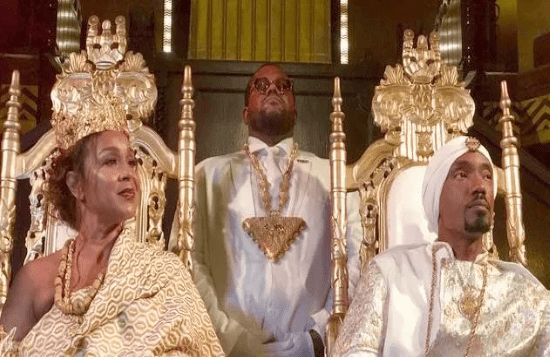 In an appearance on syndicated entertainment talk show, The Wendy Williams Show, she said [between minutes 2:00 and 2:20], “Queen Mother of Ghana, Yeah. And that’s really big for what I’m doing now, using my platform for the better me, for creating peace and awareness for education over there. I’m wanna do a small school over there, so I’m doing a lot of educating and stuff now. Yeah.”

The video interview titled, “Lisa Raye McCoy’s Truth!” has been uploaded onto The Wendy Williams Show YouTube account that has 2.37million subscribers and has been viewed more than 930,000 times.

Her comments have generated huge debate on social media in Ghana and featured at some point among the top 20 Ghana trends on twitter.

In attendance at the American actress Lisa Raye McCoy’s installation was King Yahweh, another African American philanthropist crowned a development chief in Agona Kwanyanko, a town in the Central region.

This has been confirmed by the Chief of the town, Nana Ampim Darko V, in an interview with GhanaFact.

“She is Nketesiahemaa, and as for Yaweh, three years ago he helped us in the construction of our clinic, so we made him a Nkosuohene [Development Chief]. So, I didn’t tell her she is the queen mother of Ghana. No. I’ve not given anyone that position. She cannot be the queen mother of Ghana. We have a lot of young girls in this area loitering about (idle) so we were hoping she would come and set up a vocational center to train them. That is the reason why we gave her that honor,” he stated in one of Ghana’s indigenous languages -Twi.

The honorary title of Nketesiahemaa, “is conferred in recognition of the person’s contribution to the development of the area, with special emphasis on the youth[women.] She is not a queen mother”. Senior research fellow at the Institute of African studies of the University of Ghana, Dr. Ebenezer Ayesu stated in an interview with GhanaFact.

Since the 1990s, hundreds of African Americans and some white Westerners have been honoured with various royal titles for contributing to bringing development to some communities in Ghana.

The Nkosuo stool was created in 1985 as part of the 50th Anniversary of the Restoration of the Asante Confederacy by the late Asantehene, Otumfuo Opoku Ware II, to promote development in Kumasi, the capital of the Ashanti Region and beyond.

According to the University Lecturer who holds a Ph.D. in History from Indiana University, Bloomington, USA, never in Ghana’s history has the country had an overall King and “in the present day situation where western governmental structure are in place in what we call the nation state, we don’t have King or Queen of Ghana.”

The claim is rated Mixture, this means the content are a mix of accurate and inaccurate, or the primary claim is misleading or incomplete.