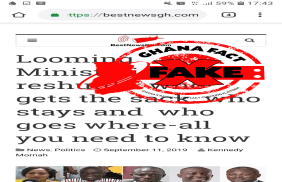 Claim: There is an impending ministerial reshuffle by President Nana Akufo-Addo.

Verdict: False. Starrfm.com.gh has denied producing the story, while government has dismissed the content of the news article.

The news article was alleged to have been produced by Starr FM, one of many media houses owned by the EIB network. A charge the media organization has since denied.

In a disclaimer published on an online news portal owned by the EIB network, Starrfm.com.gh, online editor Kent Mensah distanced the company from said report.

Deputy Minister of Information, Pius Enam Hadzide in an interview with GhanaFact dismissed the claims in the news article. “I’m not aware of any impending reshuffle,” he said.

Peacefmonline.com published the story on September 12 but has since pulled down the story and according to the editor of platform, Kwadwo Asante this follows complaints they received about the credibility of the story from Starr FM.

However bestnewsgh.com which published the story on September 11 continues to maintain the story on its platform despite the disclaimer from Starrfm.com.gh.

Editor for bestnewsgh.com, Kennedy Mornah insists the story will not be pulled down. In an interview with GhanaFact, he said, “It was attributed to Starr FM, apparently Starr FM says they didn’t do it. But I sourced it from Mynewghana.net. I’ve told them where I sourced it from so they should go there and settle it. Starr FM has used my portal that they are dissociating themselves from bestnewsgh.com. So, they can’t do that, and I would go and take it down. I won’t.”

However, an independent content search by GhanaFACT on online news portal, mynewghana.net did not show the publication of the disputed news article.

“As of now, I’ve not seen any link or publication from mynewsghana.net… If you are conversant with online publication, there is no indication that the story was sourced from mynewghana.net,” deputy online editor of Starrfm.com.gh, Kwame Danso insisted in an interview with GhanaFACT.

Here is the disputed news article published on bestnewsgh.com:

Starr FM can report that President Akuffo Addo is putting together final touches to a major reshuffle to take place in the coming days. Information is quite sketchy but sources in the Office of the Chief of Staff at the Jubilee House on condition of anonymity told our reporter that the following appointees barring any unforeseen circumstances will be leaving the Presidency.

They are Francis Asenso Boakye Deputy Chief of Staff who has parliamentary ambitions and has told close friends he feels restrained at the Presidency and Major General(rtd) Emmanuel Octhere, the National Security Advisor.

There is also speculation that Boakye Agyarko, the former Minister for Energy and Petroleum would return to the government but it’s not clear at this stage in what capacity he would be appointed.

There is speculation that the following appointments will be confirmed by the President. Minister for National Security is likely to go to Dr. Kwame Addo Kufuor, National Security Adviser to Lt General JB Danquah (rtd) and Deputy Chief of Staff-Phillip Addison. Cecelia Dapaah is likely to return to the Ministry of Aviation with Alexander Afenyo Markin likely to come into government as the Minister for Water and Sanitation.

Ibrahim Awal Mohammed is likely to head a new Ministry of Youth, Business Development and Entrepreneurship.

The President, our sources say also intends to remove and replace 13 chief executives and 22 District Chief Executives in the coming weeks to reshape and strengthen the government to speedily deliver its policies and programs.

A reshuffle had been anticipated for months but sources at the Chief of staff office say their boss Madam Frema Opare, Executive Secretary Nana Bediatuo, Deputy Chief of Staff’s Francis Asenso Boakye and Abu Jinapor had been persuading the President to delay any reshuffle to next year February for some unexplained reason.