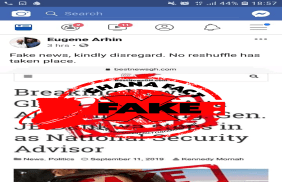 Digital news platform, bestnewsgh.com published a breaking news story on September 11 announcing that Attorney-General and Minister for Justice, Gloria Akuffo and Minister of Works and Housing, Samuel Atta-Akyea have been sacked by President Nana Akufo-Addo.

“I was reliably informed by somebody from the Office of The President(source) that Gloria Akuffo has been fired and Samuel Atta-Akyea has been fired and Brigadier General JB Danquah was to step in as National Security Advisor,” Editor of bestnewsgh.com, Kennedy Mornah stated in an interview with GhanaFact in defence of the publication.

“Fake news, kindly disregard. No reshuffle has taken place,” Communication Director for the President of Ghana, Eugene Arhin posted on his Facebook page together with a screenshot of the story and with a stamp that said, “fake news.”

An independent content search on Online news portal, bestnewsgh.com showed the story has since been pulled down.

However, Kennedy Mornah insists he would be vindicated in the coming days.

“I still stand by my story. I got a lot of calls from high places that I should bring it down. But I am certain in some few I would be vindicated.”