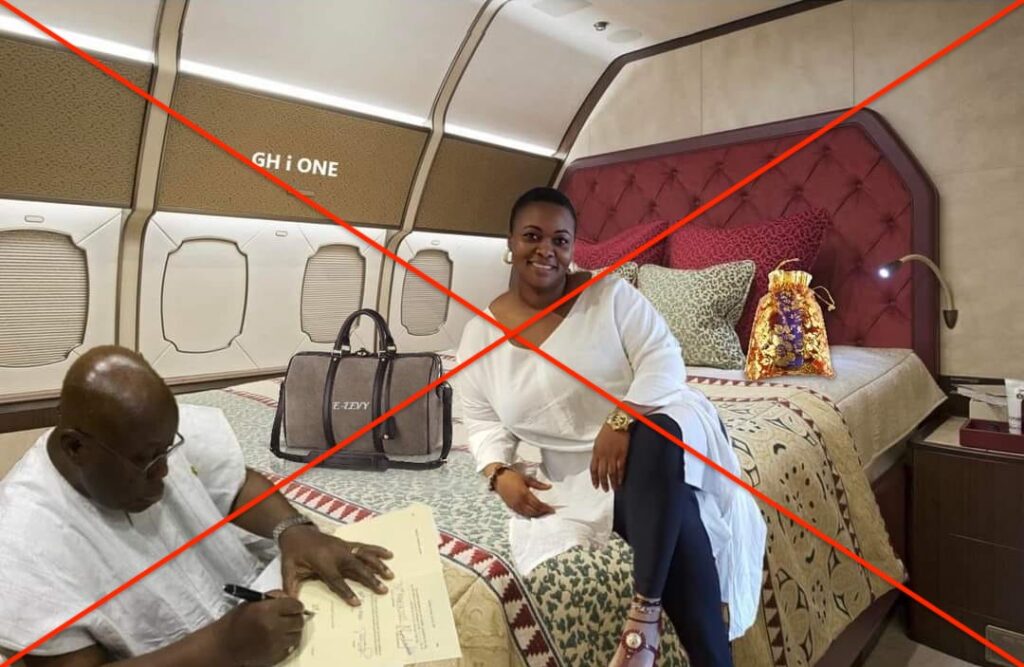 A picture showing Ghana’s President, Nana Akufo-Addo seated by a bed in a private jet alongside Evelyn Aidoo, aka Serwaa Broni is being widely circulated on multiple social media platforms. However, the picture has been digitally altered.

Recent social media outbursts by Serwaa Broni about her encounters with Nana Akufo-Addo have been fueling speculations of an alleged dalliance.

This has generated lots of social media buzz, with many users sharing different pictures of the President and Serwaa Broni – contributing to Serwaa Broni appearing in the top 5 trends in Ghana on Twitter at a point.

Meanwhile, the President has also come under heavy criticism from the Member of Parliament for North Tongu, Samuel Okudzeto Ablakwa and some section of the public for his penchant for hiring private jets when going on foreign trips when the country is in dire economic straits.

Using Google reverse image search, GhanaFact found the original image – a master bed in a VIP private jet, Boeing BBJ3 – one of the latest and largest variants of the Boeing 737 line – shared by Aviapages, a private jet industry marketplace where people go to search for aircrafts and request charter flight quotes.

The original image has been used by Samuel Okudzeto Ablakwa (here) and some credible online news platforms (here, here, here, here and here) since the legislator started a campaign to demand government accounts for how much the state spends on funding the President’s travels.

The original picture has since been digitally altered to show Ghana’s President, Nana Akufo-Addo seated by the bed in the jet alongside Evelyn Aidoo, aka Serwaa Broni.

Using another digital tool, InVID Verification Application – which is a web-based integrated toolset for journalists, we found that several parts of the now-viral picture seem to have been manipulated. 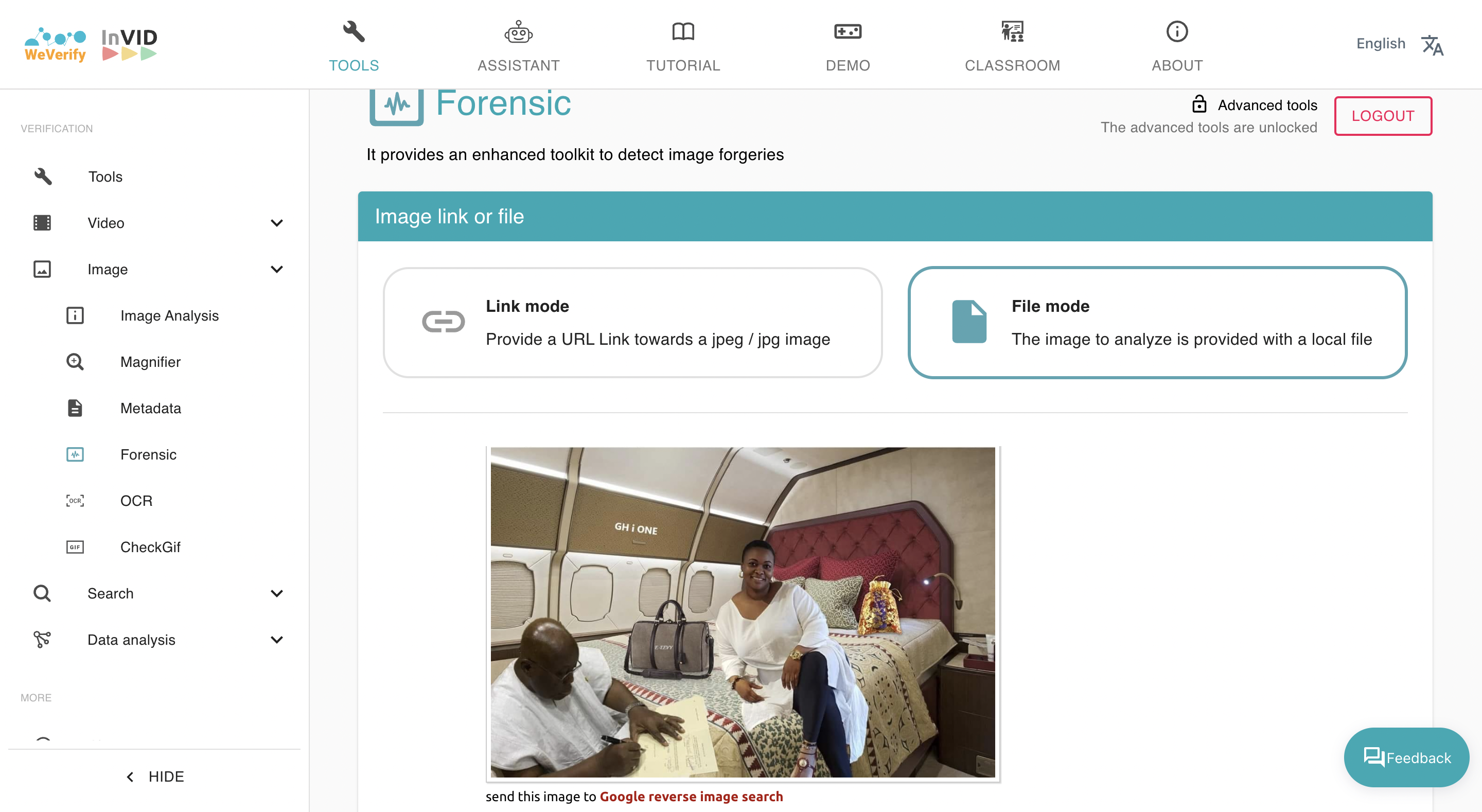 After running the viral picture through the software’s image forensics feature, which provides an enhanced toolkit to detect image forgeries, the team looked out for the error level analysis of the image, inconsistencies that occur when foreign objects are inserted into an image, algorithmically detection of a tampered image among a number of other highlights.

Error Level Analysis (ELA): is produced by recompressing the image as a JPEG of quality 75 and subtracting the new image from the old. The resulting residual is then enhanced and displayed. Areas of interest are those with higher values than other similar parts of the image. Only similar regions should be compared, i.e. edges should be compared to edges, textures to textures, and uniform regions to uniform regions. Colour discrepancies are also generally suspicious.

Evaluation: Various areas within the image have different compression levels and likely indicates a digital modification. 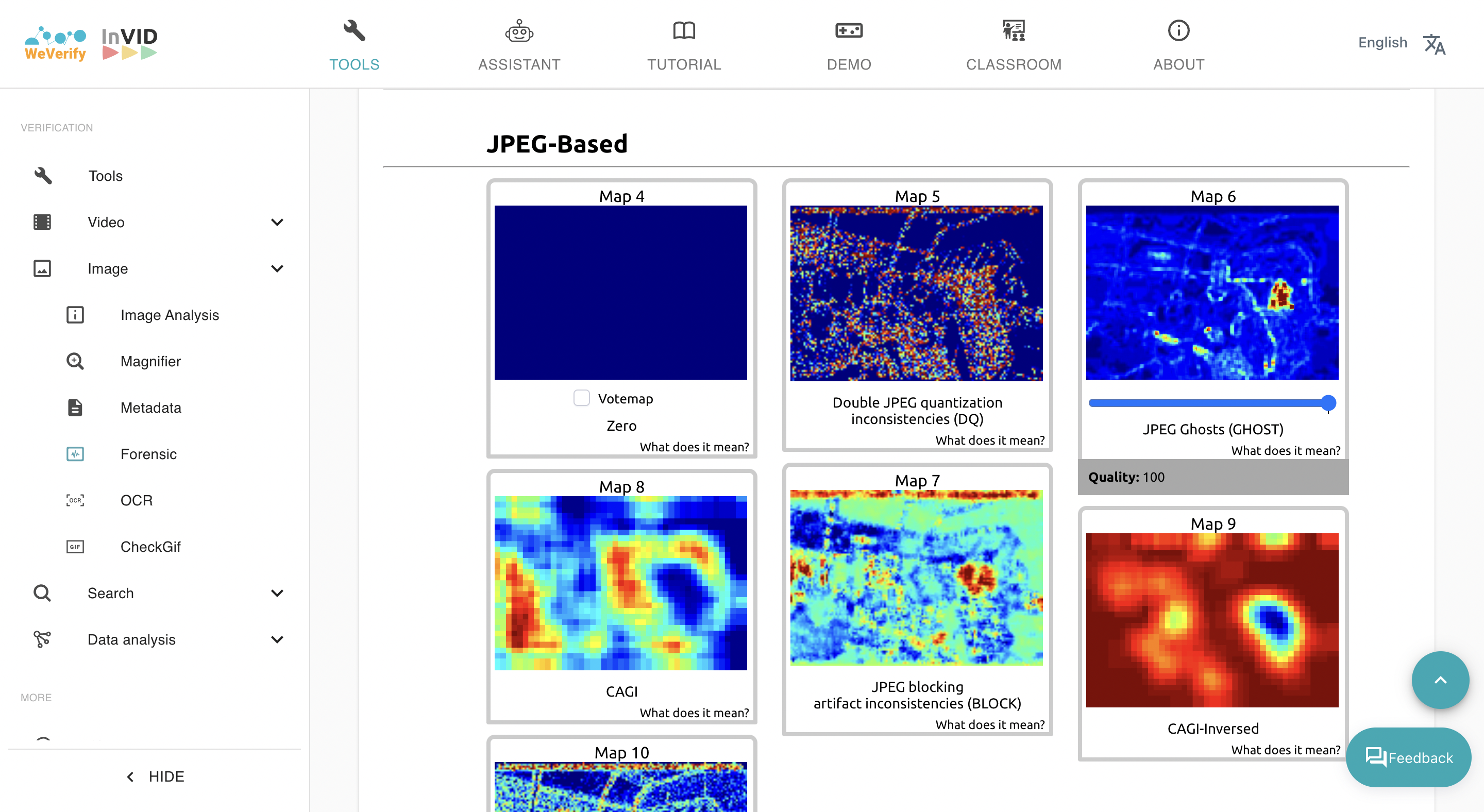 Double Quantization inconsistencies: occur when a foreign object is inserted in a JPEG image. When the new image is saved, the untampered part of the image will have been compressed twice, while the inserted region only once. In this case, the tampered area should appear red while the rest of the image blue. If medium values are present, then no conclusion may be made. Also, the detected region must be object-like: spurious dots scattered across the image, or (check) a globally high-valued image should be ignored. 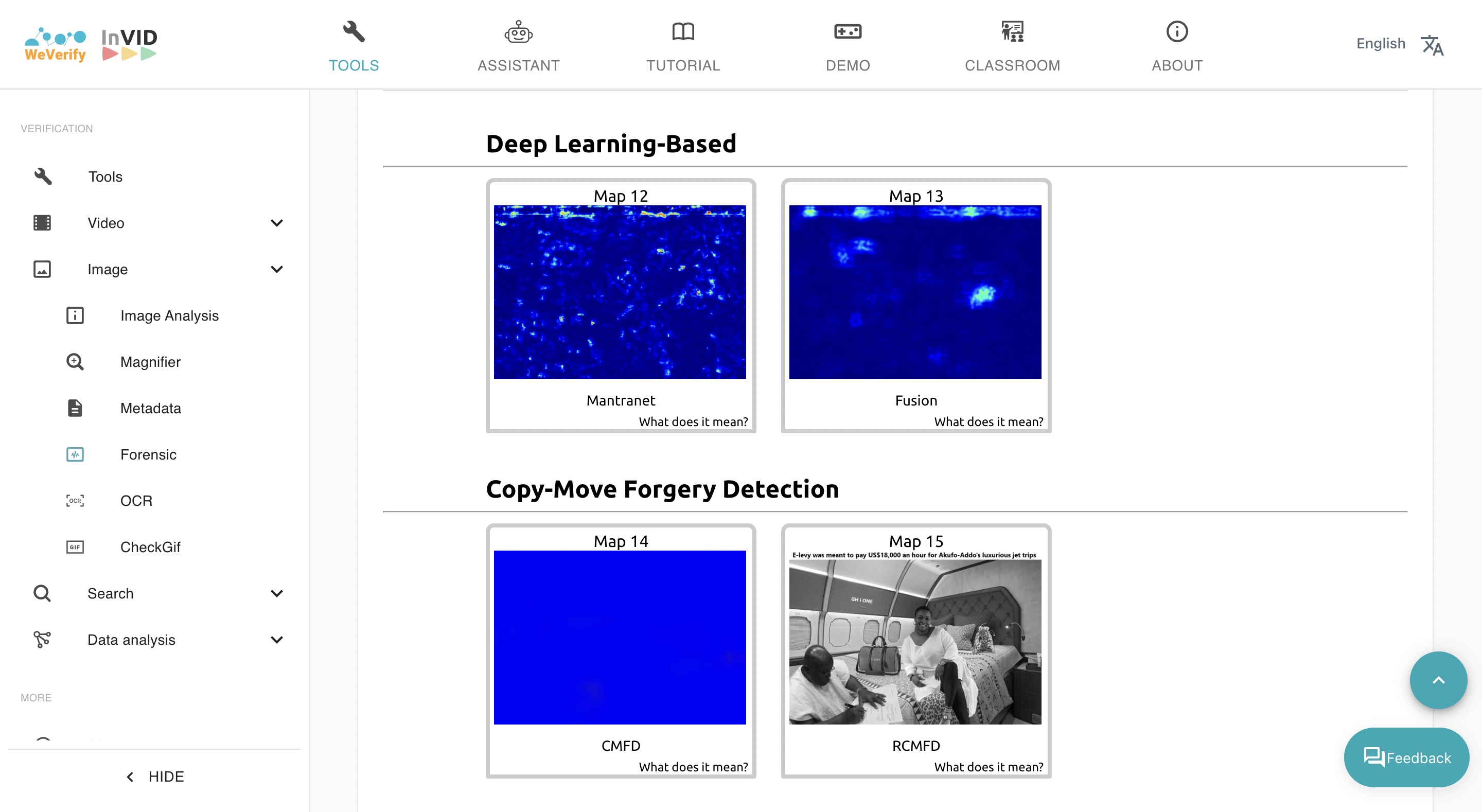 JPEG compression: operates on 8×8 grids, which are near-invisible to the naked eye but can still be algorithmically detected. Adding or moving an object on an image may locally disrupt this grid. The BLOCK algorithm detects the image grid and looks for local discrepancies. Any coherent region which contrasts with its surroundings may correspond to tampering, although high values on a low background are the most typical indication of tampering. As this algorithm is often misguided by differences in texture and focus, it is best interpreted in combination with other algorithms.

Evaluation: The different high-contrast in texture making parts of the image appear much brighter than low-texture surfaces is prove that it has been tampered with.

Further online search has shown that the picture of President Akuffo-Addo assenting to the controversial e-levy bill was inserted into the original image to create the now-viral picture.

An aide to Vice President Mahamudu Bawumia on March 31 shared a picture on Facebook, with the caption that “President Akufo-Addo has assented to the e-levy bill! It is now law!”, while a number of other credible online news platforms have also used the picture in their reports (here, here, here, here).

A closer look at the doctored viral picture shows that the image used in the online news reports has been transposed onto the now-viral picture, with the documents being signed by President Akufo-Addo exactly the same in both pictures.

The viral picture showing Ghana’s President, Nana Akufo-Addo seated by a bed in a private jet alongside Evelyn Aidoo, aka Serwaa Broni has been doctored or digitally altered.

PrevPreviousFACT-CHECK: Verifying Mahamudu Bawumia’s address on the economy
NextFACT-CHECK: Former Prez Mahama wrongly claims 86% of Ghana’s population had access to electricity in 2016Next