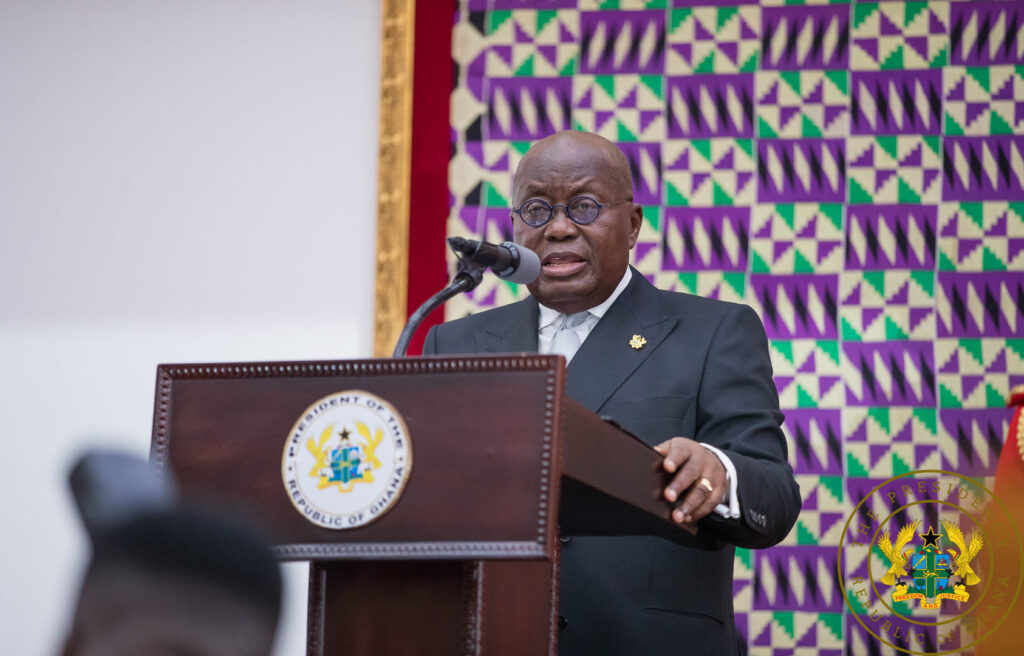 Ghana’s President, Nana Addo Dankwa Akufo-Addo on March 30, 2022, delivered the State of the Nation Address in parliament – originally scheduled for Thursday, March 3, 2022, the address was initially postponed until further notice.

The address which is mandated by the country’s 1992 constitution demands that the President at the beginning of each session of Parliament and before a dissolution of Parliament delivers a message on the State of the Nation.

For more than an hour, President Akufo-Addo presented the address and shared the government’s assessment of various sectors including the economy, education, health, infrastructure, tourism, peace and security, agriculture among others.

This fact-check report will assess 3 claims made by President Akufo-Addo in the State of the Nation address.

“Some ten thousand, eight hundred and seventy-five (10,875) kilometres of new roads have been constructed in these five (5) years.”

Ghana has a total road network of about 80,000 kilometres (km), according to the Ministry of Roads and Highways – hence the claim by the President would mean about 13.5% of Ghana’s road network would have been constructed between 2017 and 2021.

But the claim sharply contradicts a report by the Ministry of Roads and Highways on the number of roads the Akufo-Addo-led government has constructed in the last 5 years.

According to the Minister for Roads and Highways, Kwasi Amoako-Attah, a total of 4263.37 km of roads have been constructed within the period and this has been widely reported by a number of credible online news platforms, here, here, here and here.

A comprehensive document of the list of completed road projects between 2017 – May 2021 was presented to parliament on February 18, 2022,  as evidence of the government’s work in the roads sector after Member of Parliament (MP) for Amenfi West, Eric Afful filed a question demanding proof of the respective locations of all roads constructed under the current government – the detailed report has also been published on the Ministry of Roads and Highways website (here).

Even more, the Ministry of Roads and Highways make it clear in their report that the 4263.37 km of roads constructed within the last five years are not all new roads.

The summary of activities as captured in the comprehensive document shows that between 2017 and May 2021, 1,463.36 km asphaltic overlays were undertaken, 837.27 km of roads were rehabilitated, and 955.82 km of roads were gravelled and re-gravelled.

Meanwhile, the Minister for Roads and Highways, Amoako-Attah at a press briefing in 2021 stated that over 11,000 kilometres of programmed roads were expected to be completed by 2024.

The claim that 10,875 km of new roads have been constructed in 5 years is an exaggeration and FALSE, per available evidence.

“Indeed, in 2017, 2018 and 2019, we recorded average annual GDP growth rates of 7%, making us one of the fastest-growing economies in the world,” the President said in his address.

The average rate over the period is 6.945% which can also be approximated to 7%. The claim is rated TRUE.

“Mr Speaker, the cocoa industry has marked a lot of interesting and far-reaching achievements this past year, including producing one million, and forty-seven thousand, three hundred and eighty-five tonnes (1,047,385), the highest ever recorded in Ghana’s history.”

Ghana is the second-largest producer of cocoa beans in the world, with the industry highly regulated by the state through the industry regulator- Ghana Cocoa Board (COCOBOD).

The cocoa crop year starts in October and ends in September the following year – this includes the two crop seasons: major and minor crop seasons.

According to available data from the International Cocoa Organization, Ghana produced an estimated 1,047,000 tonnes of cocoa in the 2021/2021 crop year.

This claim is also rated TRUE.