FALSE: 80% of people living with HIV in Ghana pick it through gay or bisexual activity 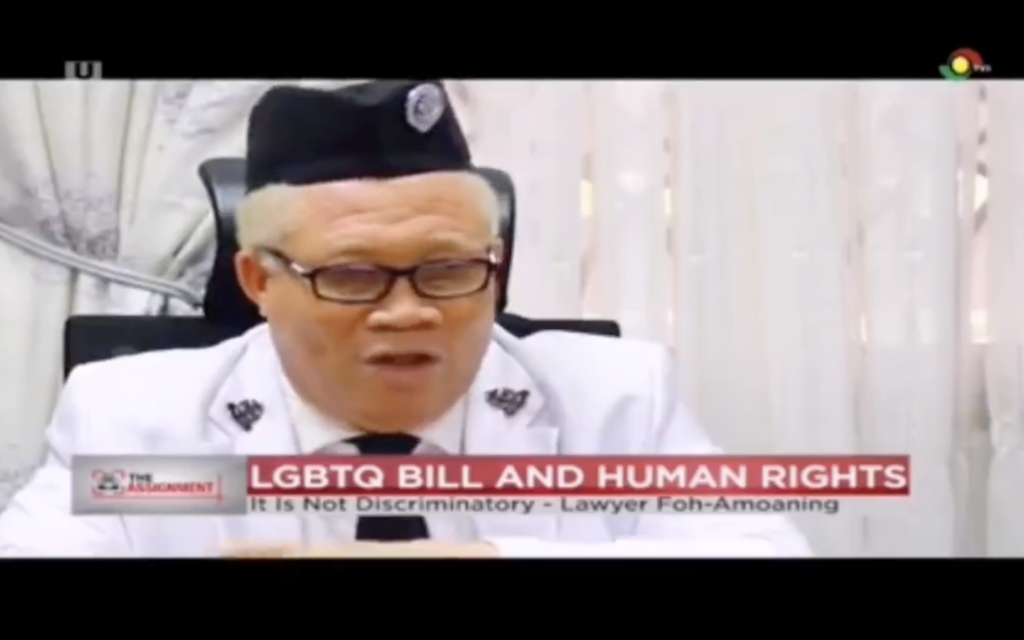 Claim: 8 out of 10 people who have got HIV/AIDS in Ghana pick it through gay or bisexual activity

Discussions about Lesbian, gay, bisexual, transgender, queer and intersex (LGBTQI) rights in Ghana have been thrown into the national spotlight, with many polarizing opinions dominating conversations on traditional and social media.

This comes after a new draft law currently being considered by the legislature seeks to tighten restrictions on the activities of the LGBTQI community and further criminalise support for the group.

In a recent interview on one of Ghana’s leading TV networks – TV3, a known critic of the LGBTQI community, lawyer Moses Foh-Amoaning said: “8 out of 10 people who have got HIV/AIDS in Ghana, pick it through gay or bisexual activity. That is a fact. Go to the Ghana AIDS Commission, they will tell you. So, it is the vector for the transmission of AIDS.”

GhanaFact has since been alerted to a 30-second-long video clip posted on Twitter showing the anti-LGBTQI campaigner making the claim, with human rights organization, Rightify Ghana calling on us to verify its accuracy.

The country recorded total annual AIDS deaths of 10,958 in the same year, according to the National HIV/AIDS strategic plan report (2016-2020).

However, the latest figures from the Ghana AIDS Commission show the country currently has 342,307 Persons Living with HIV.

So, for the claim made by Moses Foh-Amoaning to be true, then 80% of the current number (273,845) got infected with HIV through gay or bisexual activity.

But where is the proof?

A report by the Ghana Aids Commission – Ghana Men’s Study (GMS) II has explored behavioural risk factors that contribute to the HIV vulnerability of men who have sex with men (MSM) in Ghana among other objectives.

The overall size estimate of men who have sex with men (MSM) in Ghana is 54,759, according to the largest integrated bio-behavioural surveillance survey (IBBSS) to be conducted among MSM in Ghana.

The GMS II found an aggregate national HIV prevalence of 18.1% amongst MSM in Ghana. This will translate to some 9,911 people of the total estimated number of men who have sex with men (MSM) in Ghana.

“When we take the mode of transmission[HIV], 80% of transmission occurs through sex, being it heterosexual or homosexual, 15% is mother to child and 5% happens through blood transfusion and sharp objects,” Programme Manager at the National AIDS/STI Control Programme at the Ghana Health Service(GHS), Dr Stephen Ayisi Addo told GhanaFact.

So, it is therefore inaccurate to claim that 8 out of 10 people who have got HIV/AIDS in Ghana pick it through gay or bisexual activity.

According to Dr Stephen Ayisi Addo “it is also not true that if you take a 10 of people living with HIV, 8 of them are bisexual and men who have sex with men. It’s wrong.”

The Ghana National HIV and AIDS Strategic Plan (2016-2020) has also revealed that HIV prevalence amongst key populations, such as men who have sex with men (MSM), female sex workers (FSWs), persons who inject drugs (PWIDs) and prisoners is disproportionately high compared to the general population: five times higher among FSWs and more than eight times higher among MSM (GAC, 2016).

“In 2014, heterosexuals contributed 72% which means that HIV transmission is happening more in the normal, and men who have sex with-men is 5.4% and Female Sex Worker contribute 18.5%. Why is it so? When you take the prevalence of HIV among Men who have sex with Men is 18 % and yet their contribution to the total population of people living with HIV, it’s 5.4% and that is because they are few in terms of numbers but they are also contributing,” Dr Stephen Ayisi Addo explained.

When GhanaFact contacted lawyer Moses Foh-Amoaning about the findings of this report, he defended his earlier statement but failed to provide the source of his claim. “You are just an agency set up by the LGBTQI community and benefitting from them,” he further falsely claimed.

The claim that 8 out of 10 people who have got HIV/AIDS in Ghana pick it through gay or bisexual activity is FALSE.  Available data also shows that it is inaccurate to suggest 80% of Persons Living with HIV in Ghana are from the LGBTQI community.

PrevPreviousFALSE: Constant sex does NOT kill coronavirus
NextFACT-CHECK: Bill Gates has NOT called for the withdrawal of all COVID-19 vaccinesNext