CONFIRMED: 2 dead, 4 injured in Ejura after military officials fire live ammunition into a crowd of protestors 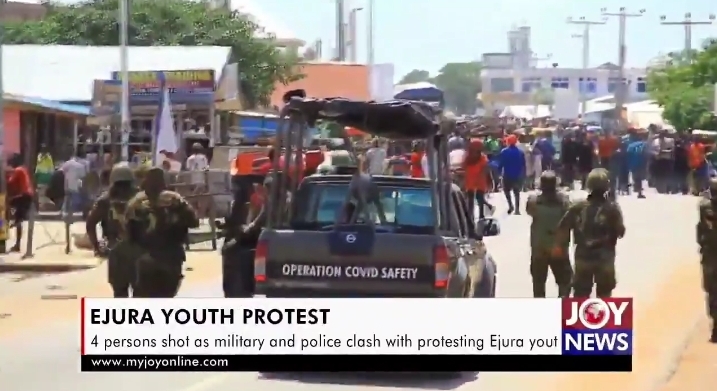 Two persons have been confirmed dead while four others have sustained gunshot wounds in Ejura in the Ashanti Region after some military officials fired live ammunition into a crowd of protestors.

A spontaneous demonstration erupted in the community today, June 29, as some youth vented their anger at the killing of a social media activist and known government critic, Ibrahim Mohammed alias ‘Kaaka’.

“I just spoke to the Ejura Hospital Medical Superintendent and he confirmed the casualties. But there were two other women who collapsed because of the chaos that ensued and were rushed to the hospital.” Mohammed Nurudeen, a journalist with Multimedia group, who has been covering the protest confirmed to GhanaFact.

The Ashanti Regional Police Command has also issued a statement confirming the number of fatalities and stating that “security has been reinforced to ensure total stability,” in the community.

The unfolding events in Ejura have captured national attention and are generating lots of discussion on social media. So far, #FixTheCountry and #Ejura are leading the Twitter trends with a combined fifty-one thousand tweets.

Meanwhile, some social media users have been making false claims about the number of casualties recorded during the military attack on civilians, with posts/tweets that between 3 and 5 persons were rather killed in Ejura being widely circulated (here, here, and here).

Social media activist, Ibrahim Mohammed alias ‘Kaaka’, a resident of Dagombaline, a suburb of Ejura in the Ashanti Region was attacked by unknown assailants on June 27 and later died in the hospital.

STATEMENT ON THE MURDER OF IBRAHIM ‘KAAKA’ MUHAMMED

The Economic Fighters League has heard with great pain the news of the death this afternoon of Comrade Ibrahim ‘Kaaka’ Muhammed who was in the early hrs of Saturday 26th June attacked in his home by a mob wielding sticks.

The Ashanti Regional Police Command subsequently arrested two suspects in connection with the murder. But the youth in the area are unconvinced by the police effort to unravel the crime.

Two Arrested for Murder at Ejura

The Ashanti Regional Police Command has arrested two suspects in the attack and murder of one Ibrahim Mohammed alias ‘Kaaka’ aged 45 and resident of Dagombaline, a suburb of Ejura in the Ashanti Region.

Meanwhile, the agitated youth were earlier seen during the protest destroying a structure allegedly belonging to the New Patriotic Party(NPP).