A short video clip allegedly showing the printing of counterfeit 20-cedi notes is being widely shared on social media. The about 2-minute long video has also been shared by BigX Media Facebook page that has a following of more than 219,000 people. 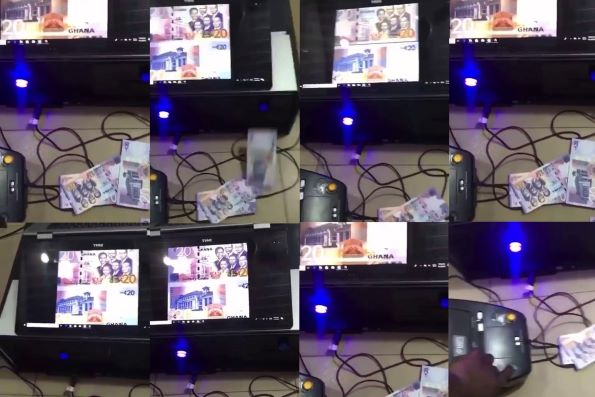 A short video clip allegedly showing the printing of counterfeit Ghana cedi notes is being widely shared on social media.

The about 2-minute long video has also been shared by BigX Media Facebook page that has a following of more than 219,000 people.

The page that describes itself as a media and news company shared the video on February 24, 2020, and has since been viewed by 47,000 people, shared by 432 others and generated 187 comments at the time of writing this report.

The source of the video clip currently remains unknown and GhanaFact can’t independently verify it’s authenticity as to whether it was staged or it truly depicts the printing of counterfeit cedi notes.

In the short video clip, an unidentified hand can be seen putting some white papers cut in the size and shape of the Ghana currency into a machine in one end and eventually the machine ejects counterfeit 20 Ghana cedi notes.

Using Invid video verification tool, GhanaFact was able to generate the keyframes of the video.

Subsequently, we used the keyframes for performing reverse image search that showed the video is not new.

However, in an interview with GhanaFact, the Public Relations Officer of the Ghana Immigration Service Micheal Amoako-Atta said the story by Yen.com.gh was misleading.

According to the GIS, there is no connection between a swoop they conducted on illegal immigrants in Ghana sometime last year and the alleged printing of counterfeit 20-cedi notes as portrayed by the report.

“These were illegal immigrants who were here illegally and did not have work permit. Most of them didn’t have passports. It [The arrests] has nothing to do with the part where you see someone printing counterfeit. No!” Amoako-Atta stated.

Suspect on the run

In May 2019 the Kasoa Divisional Police Command in the Central Region arrested two persons, for their alleged involvement in printing fake currencies. The third suspect Steven Boahene is on the run.

A printing machine, pieces of papers suspected to be used in printing the fake currencies and some toners were retrieved from the suspects’ hideout. But it is unclear whether those were the equipment seen in the viral video.

Following police investigations, the two suspects Kelvin Bright, a Nigerian national, and Godfred Mensah, a Ghanaian, were exonerated and released on bail.

“After conducting the investigations we realised that they were not involved and were just tenants in the house. The actual suspect[Steven Boahene] is still on the run,” Kasoa Divisional Crime Officer, DSP Owusu Dwomoh stated in an interview with GhanaFact.