FACT-CHECK: Photo that caused scuffle between some MPs was NOT shot in Ghana 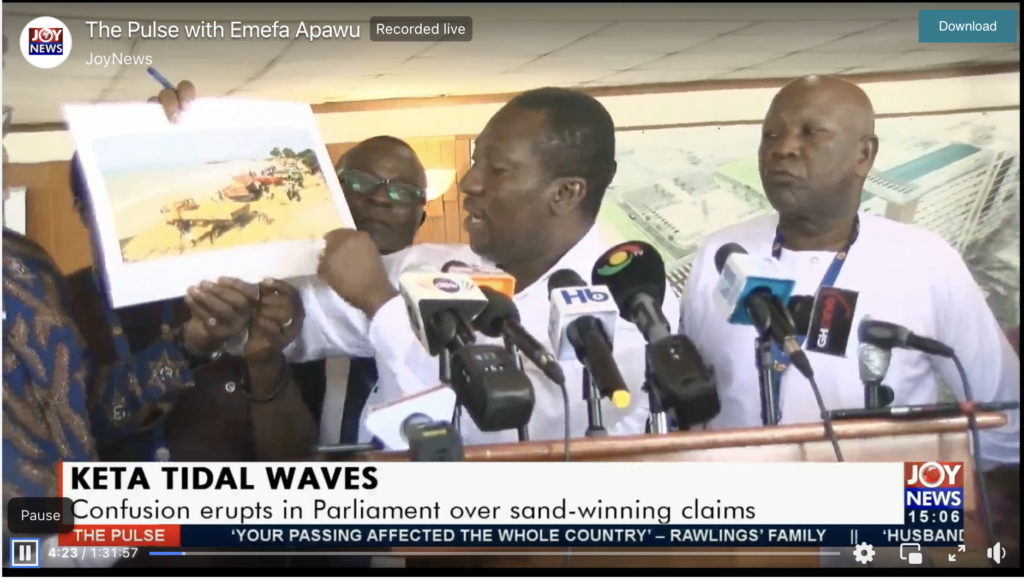 A photograph showing several tipper trucks parked at a beach with several men mining sand into the buckets of the trucks is generating controversy among some Members of Parliament(MP), leading to a scuffle at the foyer of the Ghanaian legislature.

Some members from the Minority and Majority sides of the house are divided over whether the picture was taken in Ghana, with the Deputy Majority Leader, Alexander Afenyo-Markin claiming the picture shows sanding winning activities happening in Keta – one of several communities currently affected by tidal waves that have displaced about 4,000 people.

However, the claim was disputed by a minority Member of Parliament for South Dayi, Rockson-Nelson Defeamekpor.

“I am an indigen of the area and I know the coastal lines for a fact between Afloa to Anyanui. The photographs they brought to show journalists was a photograph of a beach or of a coast that has forest and perhaps a hill log pondered by the waves. There’s no such landmark on the coastline of Keta, Afloa, Dzita, Blekusu or Anyanui in our area,” he said in an interview with JoyNews shortly after a struggle over the picture between the legislators from the opposing sides.

Using Reverse Image Search, GhanaFact has found that the photograph was not taken in Ghana but rather in Sierra Leone sometime in January 2013 by Journalist and photographer, Tommy Trenchard.

The photograph was first published by an online platform, The New Humanitarian News, in an article titled- “Sand-mining threatens homes and livelihoods in Sierra Leone.”

Tommy Trenchard is a former Reuters correspondent for Sierra Leone, who now freelances all over Africa and the Middle East, covering topics like the battle for Mosul, the after-effects of ISIS and yellow fever in the Democratic Republic of Congo.

How popular is the photograph?

GhanaFact’s online search showed the picture has been used by several digital platforms across the African continent including Senegal, Liberia, Kenya and Nigeria among others.

On September 3, 2013, Coastal Care, a website with the mission of raising awareness and mobilizing people against the ongoing decimation of coastlines and oceans around the world, used the photograph in an article and credited Tommy Trenchard as the source of the photograph.

The World Bank has also used the photograph and labelled the location as Sierra Leone in a document it produced for journalists at a workshop in Mauritius in 2016.

In  Ghana, some news websites including Modern Ghana, The Fourth Estate and Cover Ghana have also used the photograph. However, the original source of the photograph was not acknowledged in these publications.

Efforts to reach the Deputy Majority Leader, Alexander Afenyo-Markin and alert him to our findings have proved futile. GhanaFact will update this report when we get a response.

The claim that a photo showing sand-winning activities at a beach happened in Keta is FALSE.