FACT-CHECK: WhatsApp has NOT secretly changed its privacy settings for groups

Claim: WhatsApp has secretly changed its privacy settings for groups

Has WhatsApp changed its privacy settings for groups? A message being widely shared on Facebook and WhatsApp in Ghana claims the messaging app has secretly updated its group settings and that “people you don’t know can add you to a group without you ever knowing. These may include scammer, loan sharks etc…” 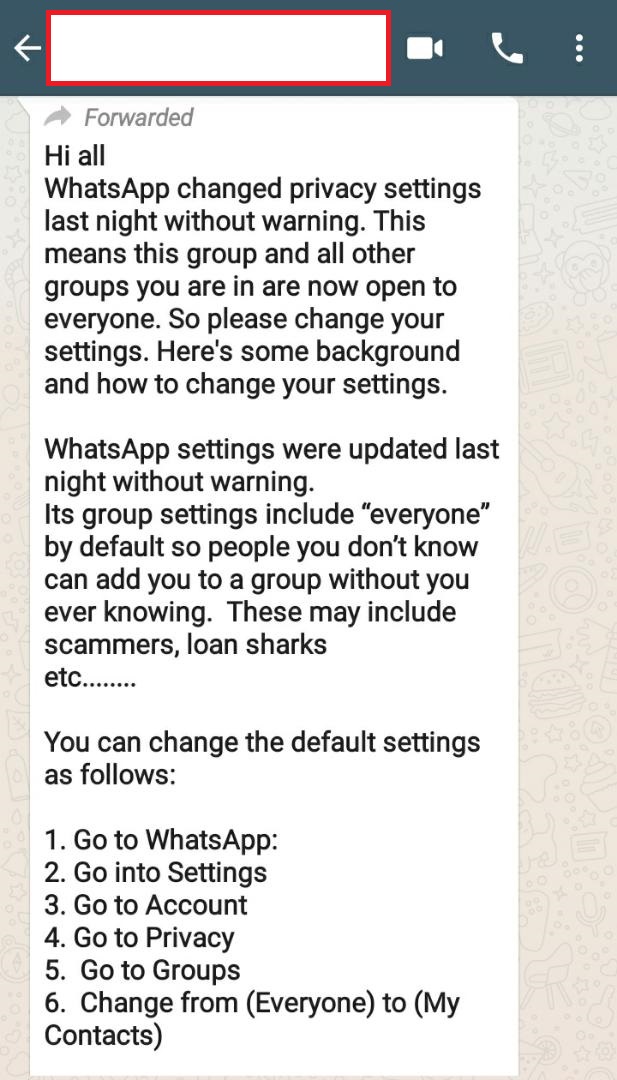 The viral warning has generated more than 17,000 Facebook interactions in the last 7 days, a leading content discovery and social monitoring platform for publishers, CrowdTangle has shown.

To verify this, GhanaFact first followed the instructions given in the viral message and indeed found “everyone” in the settings just as indicated. However, this is not new and has been the default since WhatsApp introduced its privacy settings for groups in 2019 (here).

“There has been no change to our settings… In 2019 we added new controls for those who wanted to set limits on who could add them to groups.” The messaging platform, WhatsApp told Forbes.

Meanwhile, WhatsApp users are free to change their privacy settings and have control over the group invitation system.

A planned update to WhatsApp terms of Service early this year triggered a mass exodus of users of the popular messaging service to rival platforms.

However, this has not stopped WhatsApp from implementing the update that became effective on May 15, 2021, after the initial deadline for users to accept it was moved from February 8. For users who refuse to accept the update, your WhatsApp will soon become unusable.

The update allows WhatsApp to be able to share user account information like your phone number, logs of how long and how often you use WhatsApp, device identifiers, IP addresses, and other details about your device with Facebook.

However, all communications on WhatsApp will still be end-to-end encrypted by default, meaning the policy update does not affect the privacy of your messages with friends or family in any way. And WhatsApp still won’t be able to access any of your communications or share them with Facebook.

The claim that WhatsApp has secretly changed its privacy settings for groups is MISLEADING.

PrevPreviousFACT-CHECK: COVID-19 mRNA vaccines are NOT “gene therapy” and recipients are NOT “guinea pigs”
NextFALSE: COVID-19 vaccines do NOT contain microchips!Next