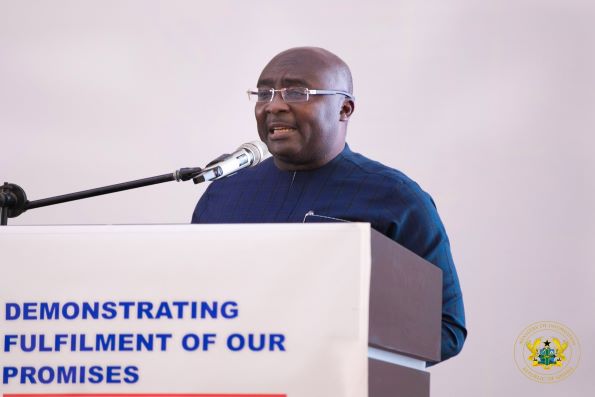 Claims:3 claims about fiscal deficit [2018, 2019] being below 5%, 8 financial institutions that started operations during NDC governments going bust and reducing/abolishing at least 15 separate taxes and levies

In 11 months time, Ghana will be heading to the polls. An opportunity for Ghanaians to pass verdict on the performance of the current government and some 275 members of parliament.

The country’s charged partisan political discourse is being tuned a notch higher with the two dominant parties making a case to win over the electorates in the upcoming December election.

Vice President Dr Mahamudu Bawumia of the ruling New Patriotic Party in a 1-hour 30-minute address at the maiden Government Town Hall Meeting and Results Fair in Kumasi in the Ashanti region has defended the track record of the current administration, made a number of claims about government fulfilling its promises to Ghanaians and provided “evidence” to support his assessment.

The address was streamed live via the Ministry of Information verified Facebook account and has since been viewed by some 159,000 people, shared 549 times and generated about 1,000 comments.

GhanaFact in this two-part fact-check report will seek to verify 1 claim each across 7 sectors broached by the Vice President Dr Mahamudu Bawumia during his address.

Claim: Fiscal deficit [2019] is below 5%, in compliance with the Fiscal Responsibility Act

According to the International Monetary Fund after including energy and financial sector costs, Ghana’s fiscal deficit in 2019 was 7% of GDP.

In the preceding year, the IMF using data sourced from the Ghana government said overall fiscal deficit, including financial sector costs, was 7% of GDP.

The government needs to explain the reasoning behind the exclusion of financial sector cost in computing the fiscal deficit figures or it would amount to cherry-picking data for a parochial gain.

In an interview with GhanaFact, Economist and civil society activist Franklin Cudjoe said, “I don’t know why he did that, and I don’t think it is right. I suspect he is probably thinking because there are the outstanding ones to be paid which is the microfinance institutions. But he should have added it.”

“We should never forget that under the NDC we had the messy liquidations of the BCCI in 1999, and the closure and liquidation by the Bank of Ghana in the year 2000 of the Co-operative Bank and Bank for Housing and Construction, the collapse of infamous DKM and the proliferation of unlicensed financial services such as Pyram and R-5, God is Love fan club, Menzgold and others that took advantage of their customers.”

The Bank for Credit and Commerce was technically insolvent since 1991 as a consequence of incurring a large foreign exchange liability and was managed under BOG supervision since then (this was the Ghanaian subsidiary of BCCI which was closed down by regulators in the UK and USA in 1991).

The two state-owned banks, Bank for Housing and Construction and Co-operative Bank were liquidated following heavy losses in the year 2000.

In 2015, thousands of depositors lost their investments running into millions of cedis after the Bank of Ghana suspended the operations of the DKM for violating the Banking Act, (673), 2004.

Between1992/1995 two non-bank financial institutions, R5 and Pyram Ghana operated a loans and savings scheme without a license from the Central Bank. The companies went bust and depositors lost their savings.

God is Love Fun Club in Sunyani was one of 10 “unlicensed and illegal financial institutions and fun clubs” the BOG warned the public against in 2015.

Menzgold Ghana Limited came to the notice of the Bank of Ghana in 2014 and was shut down in September 2018 by the Ghana Securities and Exchange Commission for breaching the laws of the country. The gold dealership and investment firm is reported to have initially traded as Menzbank; then changed to Menzbanc and then finally to Menzgold, due to warnings from the Bank of Ghana.

All 8 financial institutions mentioned by Dr Bawumia started operations when the NDC was in government. The claim is rated True

“In fulfilment of our promise to move the economy from a focus on taxation to a focus on growth we have thus far reduced or abolished at least 15 separate taxes and levies.”

Minister of Finance, Ken Ofori-Atta announced in the 2017 Budget Statement and Economic policy announced the abolishment and reduction of “nuisance” taxes to reenergize the private sector. The following specific measures were to be implemented in the short to medium term:

In the 2018 Budget statement, Finance Minister Ken Ofori-Atta revealed that the private Universities will no longer be required to pay corporate income tax.

Subsequently, in 2019 Vice President Dr Mahamudu Bawumia, announced that the benchmark value of import duties will be slashed by 50% and importers of vehicles will also enjoy a 30% cut while addressing an Economic Management Team (EMT) town hall meeting.

This claim is largely true but there will be the need for clarification on the VAT/NHIL rate abolished on real estates. Is it 17.5% or 5%? And was the reduction in the special petroleum tax rate by 4.5% or 2.5%?

The 3 claims were rated one false, two others true.

They include a claim about the fiscal deficit [2018, 2019] being below 5%, 8 financial institutions that started operations during NDC governments going bust and reducing/abolishing at least 15 separate taxes and levies.