MISLEADING: Videos showing 2 men stripped down to their underwear and being flogged have been wrongly characterized 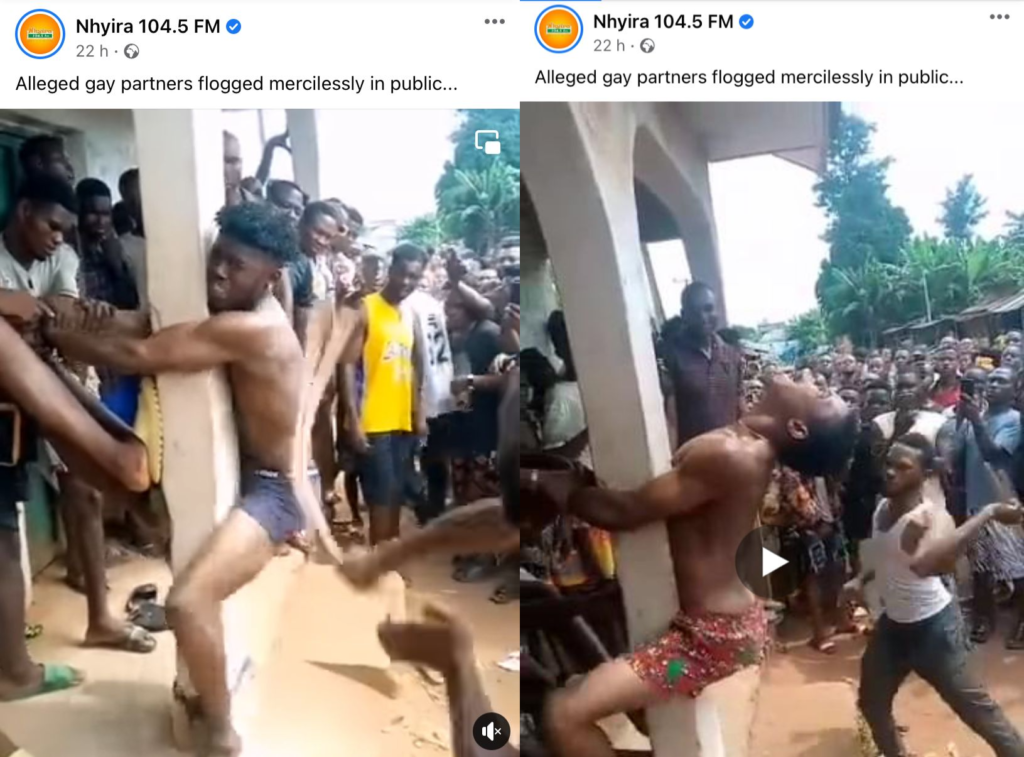 With more than 2.7 million followers on Facebook, Nhyira FM has shared some videos showing two men stripped down to their underwear, tied to a pillar and being flogged in public with a caption saying, “alleged gay partners flogged mercilessly in public.”

In less than 24 hours, the two videos (here and here) have garnered more than 1.3 million views and generated lots of Facebook interactions including comments and shares.

A human rights organization, Rightify Ghana reacting to the Facebook post says it has the potential of promoting violence against LGBTQ persons in the country and is calling on GhanaFact to verify whether the video is being accurately represented.

The thread provides some background. As an independent fact-checking agency, we believe you know the truth behind the videos.

Discussions around the LGBTQ community have become a lightning rod in Ghana following efforts to pass a bill in parliament that would criminalize homosexuality and make advocating for LGBTQ people a crime.

A Google Reverse Image Search of a screenshot taken from one of the videos published by Nhyira FM showed the videos were taken in Ebenator Ekwe, Imo State – Nigeria and not in Ghana.

The videos surfaced online on November 9, 2021, and were published by a Facebook user, Mc Banana Mouth with the caption: “if every village youth organization will be like this… mkpuru mmiri (ice) will not have a place here again.”

Our search showed the men were being flogged for abusing Methamphetamine or Crystal Meth by a local youth association that has decided to use what it calls ‘cane deliverance’ – a situation where drug abusers and peddlers are tied to a tree or pole at a public square and flogged supposedly to dissuade them from the act – to fight the drug menace in their community.

A Nigerian lawmaker, Henry Nwawuba while moving a motion in the House of Representatives recently said the country was dealing with a Meth Epidemic.

“Many homes in the south east are currently facing the dangerous effect of Methamphetamine nick-named Mkpuru-Mmiri which translates to seed of water,” he said.

In July of 2011, Nigerian Drug Law Enforcement Agency found the first evidence of a large-scale methamphetamine manufacturing facility – a site with the capacity to manufacture 25 to 50-kilogram batches of methamphetamine – just outside Lagos.

Eight months later, a second facility was identified in Satellite Town, Lagos, UNODC stated in a report. Some 41 kg of ephedrine and almost 5 kg of finished methamphetamine were seized.

The videos published by Nhyira FM have been misleadingly characterized.

PrevPreviousFACTSHEET: Pregnant women and children aged 15 and above are now being vaccinated against COVID-19 in Ghana
NextOmicron variant: What you need to knowNext