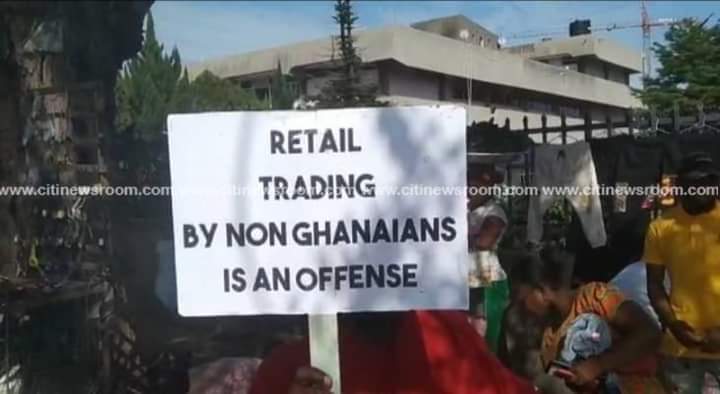 Ghanaian trade union locks up foreign-owned shops again? That is the claim made by a Twitter user on September 22, which has since generated more than 2,500 interactions including likes and retweets on the microblogging site at the time of writing this report.

The Twitter post which came with three other pictures further claimed that: “The Ghana Union of Traders Association on Monday locked up over 40 shops belonging to other foreigners in the Eastern Region of Koforidua, saying it was against the law for foreigners to be engaged in retail trading.”

Following an alert from Africa Check, a fact-checking organisation headquartered in South Africa, we sought to verify:

GhanaFact first conducted a reverse image search of the pictures that were posted in the Tweet and traced two to a news article published by CitiNewsroom – a credible digital news platform in Ghana, owned by OMNI media.

The two images have also been watermarked by the news organisation to facilitate any claim of ownership and were first published on September 20 before it was republished on social media two days later.

The third image showing a black locked gate was traced to a BBC report relating to the same subject published on September 21.

“I had a call from a member of GUTA that they were embarking on a sensitization and advocacy drive to call on their members to prevent foreigners from engaging in retail trade. So, I was there to cover what happened,” he told GhanaFact in an interview.

About 40 shops belonging to foreigners engaging in retail trade in Koforidua were locked up by members of GUTA in the Eastern Region.

“It was a follow-up to a notice that was sent around last year for all foreigners engaged in retail trade to send their documentation to a national task force dealing with the issue. But none of them did,” the Public Relations Officer of the group, Darlen Nana Boateng told GhanaFact.

According to the Ghana Union of Traders Association (GUTA), the country’s laws prohibit foreigners from engaging in retail trade in the markets – pointing to sections 27(1) and 28 (2) of the Ghana Investment Promotion Centre (GIPC) Act, 2013 (Act 865), to back their stance.

The law demands a $1 million minimum capital requirement of any foreigner engaging in trading enterprises in Ghana and also reserves some activities including petty trading and hawking exclusively for Ghanaians.

This has continued to be a flashpoint with regards to relations between local and foreign traders over the years, despite several engagements facilitated by the government.

A Presidential Task Force on Foreigners in Retail Trade including members of GUTA, Ministry of Trade and Industry, Ghana Immigration Service, Ghana Police Service, Customs and the National Intelligence Bureau has been set up to help address the issue.

Efforts by the Ghana Investment Promotion Centre (GIPC) to review the law have been met with stiff opposition from Ghanaian traders.

However, Ghana’s Speaker of Parliament, Alban Kingsford Bagbin has announced plans to exempt Nigerians from the $1 million minimum capital requirement under the GIPC Act 2013, Act 865.

The claim that shops belonging to foreigners engaging in retail trade in Koforidua were recently locked up is TRUE.