FACT-CHECK: Joe Biden DID NOT kneel before George Floyd’s son to beg for forgiveness 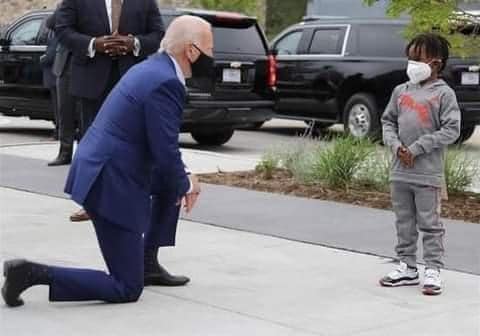 A picture showing the President of the United States of America, Joseph Biden bending on one knee before a little boy is being widely shared on Facebook, with some users claiming he was begging George Floyd’s son for forgiveness.

Leading content discovery and social monitoring platform for publishers and brands, Crowdtangle shows there have been more than 25,000 interactions on Facebook on the subject. 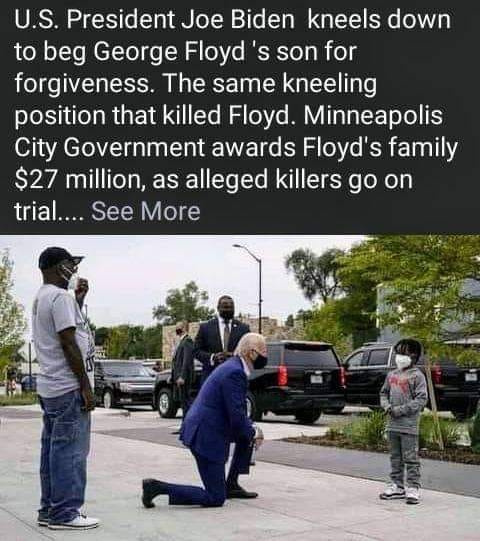 Who is George Floyd?

George Perry Floyd Jr. was an African American man murdered by police during an arrest in Minneapolis.

Derek Chauvin, one of four police officers who arrived on the scene, knelt on Floyd’s neck and back for 9 minutes and 29 seconds and a video of the encounter went viral, sparking worldwide protests against racism and excessive use of force by police.

A US jury subsequently found Derek Chauvin guilty in a murder trial and convicted him of all charges in the death of George Floyd.

Using a reverse image search engine, TinEye, GhanaFact found the image was captured during a campaign visit by then-candidate Biden to Michigan in 2020 and is now being mischaracterized.

The image can be traced to international photo agency Getty Images, who captioned it “Democratic presidential nominee Joe Biden kneels to chat with C.J. Brown while shopping at Three Thirteen, an apparel store on the city’s Avenue of Fashion, September 09, 2020, in Detroit, Michigan.”

A video of the whole interaction can also be found here.

In Ghana, the same image has been misleadingly used in the past to portray a meeting between Democratic presidential nominee Joe Biden and Ghanaian actor, Stephen Atanga popularly known as Don Little ( here and here).

Has the city of Minneapolis awarded George Floyd’s family $27million?

True. The city of Minneapolis has agreed to pay $27 million to the family of George Floyd.

The family’s attorney, Ben Crump said it was the largest pretrial settlement in a civil rights wrongful death case in U.S. history.

PrevPreviousFACT-CHECK: Four COVID-19 misinformation and vaccine conspiracy theories
NextFACTSHEET: As “Dumsor” kicks in, how does Ghana compare to other countries in terms of access to electricity?Next