FACT-CHECK: A mountain of gold discovered in Congo? 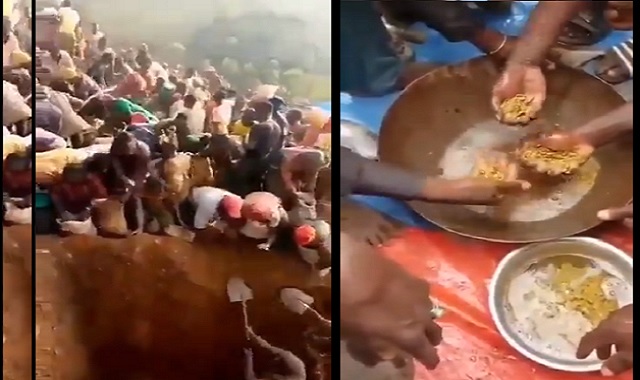 Claim: A mountain of gold has been discovered in Congo?

Multiple videos being shared on social media platforms including Twitter, YouTube and Facebook claim a “mountain of gold” has been discovered in the Democratic Republic of Congo (DRC).

In the videos, hundreds of men, women, and children are seen using different kinds of tools including shovels to dig and chip off suspected gold-rich ores from the mountain in what can be described as a gold rush.

The videos also show some of the diggers, washing and displaying what looked like gold nuggets in a pan, a process mostly used by alluvial miners.

The moment of washing the dirt and extracting the gold. #Congo pic.twitter.com/7L1V1Clm30

What we sought to verify?

Rose Mathe, a fact-checking journalist at Congo Check- an independent fact-checking platform in the Democratic Republic of Congo (DRC) confirmed to GhanaFact that the viral videos were truly captured in some parts of the DRC.

“The viral videos date from 2019 according to one of the sources on the spot. There are other[news] publications with the same video that speak of Birava, 35 kilometers from the city of Bukavu, in the province of South Kivu in the DRC[as the place of discovery.]” She said.

“Yes! This video is from the Democratic Republic of Congo but not in Birava as indicated rather in Luhihi, a mining area discovered in June 2019, in the province of South Kivu,” a civil society activist in South Kivu, Emmanuel Bengheya said in an interview.

According to a community leader in Luhihi, Christian Murhula Ciringwi, “These are old images and videos from Luhihi, the day it[gold mine] was discovered in June 2019.”

A mountain of gold?

“The truth is, the diggers just collected a small quantity[of gold when it was discovered]. The diggers also picked up another small amount of gold a few days ago and it is the same as we collected for the first time,” another civil society activist in South- Kivu, Pascal Kazamba said, suggesting it will be an exaggeration to describe the mountain as full of gold.

Meanwhile, the Congolese fact-checking journalist, Rose Mathe said: “ the mining area was in effect closed by the Provincial government on March 1, 2021, after clashes between the diggers and Police in Luhihi in South-Kivu.”

The discovery of gold-rich ore in Luhihi is putting pressure on the small village around 50 km (30 miles) from the provincial capital, Bukavu, South Kivu Mines Minister Venant Burume Muhigirwa confirmed in an interview with Reuters.

The claim that a mountain of gold has been discovered in Congo is rated PARTLY TRUE.