FALSE: About 50% of Ghanaian men are impotent

A viral news report originally published by otecfmghana.com claims that about 50% of Ghanaian men are impotent. The claim, which is attributed to Consultant Urologist, Dr Samuel Amanamah has been republished by multiple online platforms but following further probe, the claim has been found to be false. 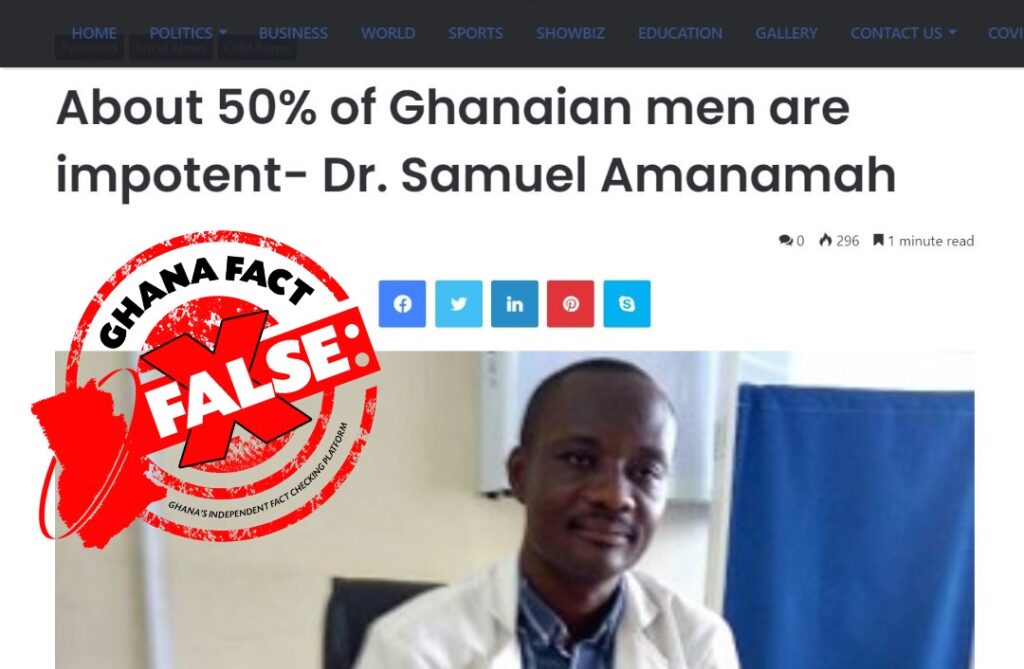 Claim: About 50% of Ghanaian men are impotent

On September 20, a leading member of a sexual and reproductive health organisation, Dr Samuel Amanamah addressed a symposium in the Ashanti regional capital, Kumasi on male sexual dysfunction.

Subsequently, digital platform Otecfmghana.com published an article with the headline: “About 50% of Ghanaian men are impotent,” and attributed the statement to the Consultant Urologist, Dr Amanamah.

The online article has since been republished by several news websites (here, here and here), widely shared on social media including Facebook, Twitter and WhatsApp, and similar versions of the article also published by the Daily Dispatch Newspaper. 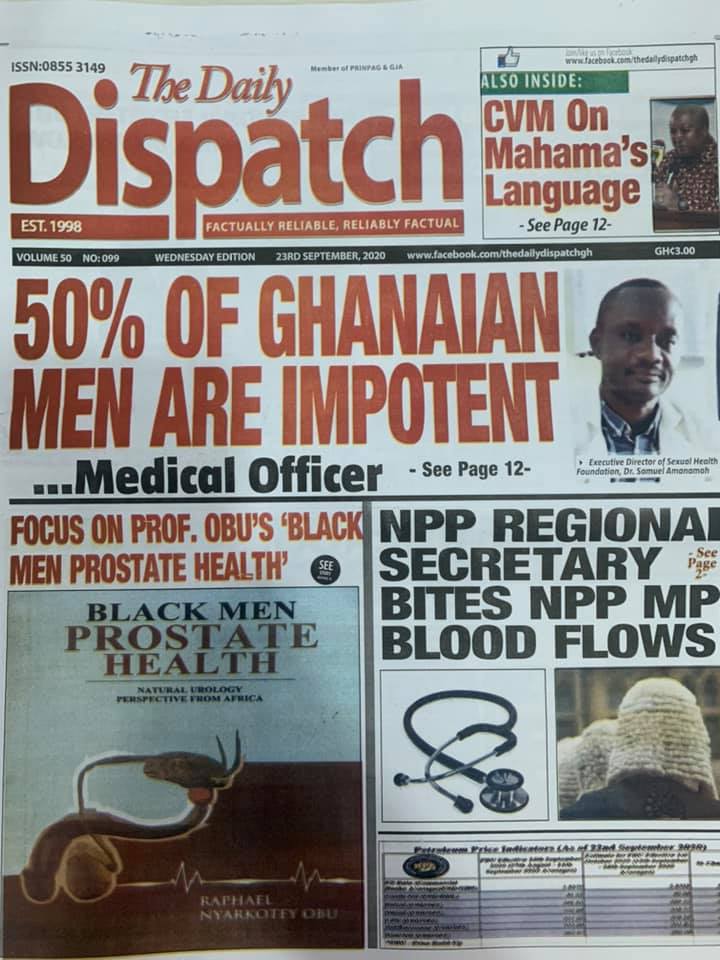 A closer look at the original news article and the quotes attributed to the Executive Director of Sexual Health Foundation, Dr Samuel Amanamah showed he never made the claim that “about 50% of Ghanaian men are impotent”.

The story published by Otecfmghana.com captured the Consultant Urologist as saying: “most men between the ages of 40 and 70 have sexual dysfunctions due to diseases like diabetes and hypertension which are unknown to them. The situation creates a lot of family destabilizations leading to broken homes.”

“The headline is misleading. I didn’t say 50% of Ghanaian men have erectile dysfunction. I said 50% of men between 40 and 70 have the challenge and not all Ghanaian men.” Dr Amanamah denied in an interview with GhanaFact.

When asked about the source of his data, Dr Amanamah said the study was conducted in Massachusetts, USA.

“We quote this Study MMAS a lot in our field because it was a very large study. There has been other research in other countries since then but the results have not been much different from this,” he said citing a January 2020 study-” Erectile Dysfunction Statistics.”

“Erectile dysfunction (ED) is the inability to develop and maintain an erection for satisfactory sexual intercourse or activity,” the MMAS study defined.

The Massachusetts Male Ageing Study was a community based, random sample observational survey of non-institutionalized men 40 to 70 years old conducted from 1987 to 1989 in cities and towns near Boston, Massachusetts.

The research work revealed a combined prevalence of minimal, moderate and complete impotence was 52% among the sampled population and according to Dr Amanamah, ” I like to round it up so it sticks better.”

It further revealed that the prevalence of complete impotence tripled from 5 to 15% between subject ages 40 and 70 years.

The claim that about 50% of Ghanaian men are impotent is false.