FACT-CHECK: 2019 marks the 400th anniversary of the transatlantic slave trade? 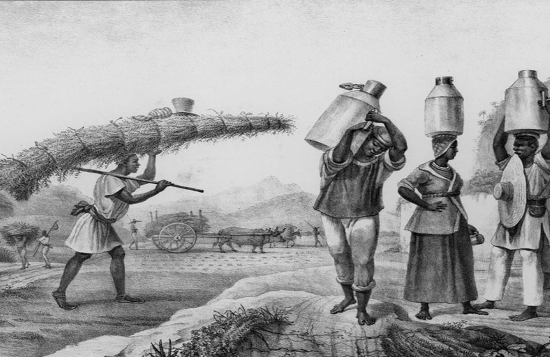 Claim: 2019 marks the 400th anniversary of the start of the transatlantic slave trade

President Nana Addo Dankwa Akufo-Addo’s recount of the history of slavery as delivered in a speech during his tour of the Caribbean sometime this year is generating controversy on social media.

According to some twitter users, the Ghanaian President in promoting ‘The Year of Return, Ghana 2019’, sought to promote an American “1619” narrative of when the transatlantic slave trade started, thereby erasing the memory of the earlier enslavement of Africans.

ghana’s president visiting trinidad&tobago says: “as we start mark [2019 as] the 400th anniversary of the start of the transatlantic slave trade..” huh? who are his speechwriters? elmina fort was built in 1482, and he’s saying that 1619 is the beginning of trade in Africans?

What the President Said

In a speech during his visit to Trinidad and Tobago [between minutes 7:24 and 7:45], President Nana Addo Dankwa Akufo-Addo said:

“We are marking the 400 year anniversary of the first recorded arrival in 1619, of the first 20 enslaved Africans in the common wealth of Virginia which was to become a part of the United States of America, initiating some of the most barbaric episodes in human history , the transatlantic slave trade and slavery.”

“I launched the commemoration of the year of return at a ceremony last October in Washington DC USA. As we mark the 400th anniversary of the start of the transatlantic slave trade, come and visit and let us together demonstrate that we have overcome.”

This was captured in the official nine minutes long video clip of the President’s visit, published on President Nana Addo Dankwa Akufo-Addo’s verified Facebook account that has more than 1.6 million followers.

The video clip titled,”President Akufo-Addo’s official visit to Trinidad and Tobago” has since been viewed more than 56,000 times, shared by more than 500 people and generated 131 comments.

The Year of Return campaign is a government-backed project to position Ghana as a key travel destination for African Americans and the African Diaspora.

On the official website of the project, it states that:

“The “Year of Return, Ghana 2019” is a major landmark spiritual and birth-right journey inviting the Global African family, home and abroad, to mark 400 years of the arrival of the first enslaved Africans in Jamestown, Virginia.”

The Ghana Tourism Authority (GTA) under the auspices of the Ministry of Tourism, Arts, and Culture is leading the project in collaboration with the Office of Diaspora Affairs at the Office of the President, the PANAFEST Foundation and the Adinkra Group of the USA.

US House speaker Nancy Pelosi and 13 members of the Congressional Black Caucus in August 2019 visited Ghana in observance of the 400th anniversary of the arrival of enslaved Africans in Virginia[disputed].

According to an article published by the Smithsonian journal in Washington, D.C, 1619 was not the first time Africans could be found in an English Atlantic colony.

“Unfortunately, 1619 is not the best place to begin a meaningful inquiry into the history of African people in America. Certainly, there is a story to be told that begins in 1619, but it is neither well-suited to help us understand slavery as an institution nor to help us better grasp the complicated place of African peoples in the early modern Atlantic world,” Professor of history at Davidson College in the US, Michael Guasco stated in the article.

He explains that overemphasizing the “1619” American narrative of slavery distorts history and silences the memory of the more than 500,000 African slaves who had crossed the Atlantic earlier.

Meanwhile, a senior research fellow of the Institute of African Studies at the University of Ghana, Dr. Ebenezer Ayesu says the 1619 date is relevant to the Ghanaian perspective because it marks when slaves from the shores of then Gold Coast started crossing the Atlantic.

“But in presenting the narrative we should serve notice that there have been other periods [before the transatlantic slave trade] … I do agree (with Michael Guasco.) But no matter how you look at it we have to start from somewhere,” Dr. Ayesu intimated in an interview with GhanaFact.

According to the Chief Executive of the Ghana Tourism Authority, Akwasi Agyemang, “we are cognisant of the fact that slavery didn’t start in 1619, it was way before that…the 1619 date is an American version, but then we use milestones always to be able to tell stories. We know that people [slaves] might have gone to the English colonies and the Americas long ago but those were not documented, so where you have the first documented arrival- significant enough now to say that we have 20 people[slaves] arriving on this date. How do we commemorate that without necessarily celebrating slavery.”

The claim will be rated Mixture that is the claim(s) of the content are a mix of accurate and inaccurate, or the primary claim is misleading or incomplete.