ANALYSIS: How does Ghana compare to the UK in solving pothole-ridden roads?

“I only recently broke the brake fluid pipe of my car because of a pothole”: Shayma Sharif, 21, lamented. For many, concerns about rampant potholes on roads and highways are mostly identifiable with under developed or developing countries like Ghana in West Africa. 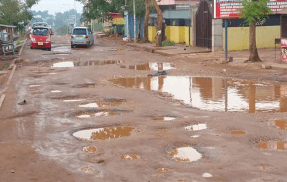 “I only recently broke the brake fluid pipe of my car because of a pothole”: Shayma Sharif, 21, lamented.

For many, concerns about rampant potholes on roads and highways are mostly identifiable with under developed or developing countries like Ghana in West Africa.

“I don’t like public transport, so I practically drive everywhere. I have a growing concern with potholes because I had to spend 250 pounds just last two weeks to repair my car”: the Mazda3 Sports car owner said.

British drivers have spent more than 900 million pounds on repairing vehicles damaged by potholes in the past 12 months, the latest data from garage chain, Kwik Fit shows.

Close to half of those surveyed (47 percent) said they had been forced to hit a pothole because avoiding it would compromise safety.

Almost a quarter (23 percent) of roads in London are deemed poor, while 24,000 miles of roads in England and Wales need repairs within the next 12 months, the Annual Local Authority Road Maintenance (ALARM) survey produced by Asphalt Industry Alliance (AIA) has said.

UK Chancellor of the Exchequer, Philip Hammond in the 2018 autumn budget announced a close to 30-billion-pound major investment in England’s roads in the coming years, including a five-year (2020-2025) National Roads Fund to provide long-term certainty for roads investment.

The UK government is allocating 420 million pounds to local authorities in 2018/19 to tackle potholes, repair damaged roads, and invest in keeping bridges open and safe and 150 million pounds to improve local traffic hotspots such as roundabouts.

The National Roads Fund would receive 28.8 billion pounds, out of which 25.3 billion pounds would be allocated to the largest ever investment in England’s strategic roads through the Roads Investment Strategy 2.

According to the head of UK policy at the Freight Transport Association (FTA) Christopher Snelling, the budgetary allocation to repair potholes is woefully inadequate.

He points to the ALARM survey which estimates that more than 9.3 billion pounds would be needed to carry out a one-time catch-up to bring local roads in England up to scratch.

“The damage caused by potholes to the UK’s logistics fleet is adding unnecessary cost to the operation of vehicles tasked with keeping Britain trading, and FTA is concerned that the funding released by the Chancellor will mean that operators will continue to incur these unreasonable costs at a time of extreme trading pressure.  More could and should have been done to help the logistics sector at such a critical time in the nation’s trading history. It is a lost opportunity”: Christopher Snelling said.

Gold Coast now Ghana, a former British colony, but for that connection many wouldn’t have thought share similar challenges with potholes and bad roads like the United Kingdom.

In the last year, there have been more than a dozen spontaneous demonstrations and protests in several communities across Ghana, with citizens demanding government fix potholes or repair their bad roads.

Ghana’s Ministry for Roads and Highways has said the country has to construct about 74,000 kilometers (km) or 45,981 miles of roads to meet the demands of the citizenry despite the periodic maintenance of 28,125km of trunk roads, 9,182km of feeder roads, and 1,437km of urban roads at the end of September 2018.

A World Bank report on Ghana’s transport improvement strategy- 2016 revealed, 29 percent of the country’s roads were in poor condition, 32 percent in fair condition, while 39 percent in good condition.

Meanwhile road transport remains the predominant mode of transportation in Ghana, carrying over 95 percent of passenger and freight traffic.

Presenting Ghana’s 2019 Budget, Minister of Finance Ken Ofori-Atta said the government would be investing “massively” in roads and infrastructure out of the 74.3 billion cedis projected expenditure for the year (10.7 billion pound using Bank of Ghana interbank forex rate on October 31).

He said the government would undertake routine maintenance activities on 11,100km trunk, 25,000km feeder and 6,500km urban road networks across the country.

Ken Ofori-Atta also gave a tall list of roads to be constructed in almost all ten regions of the country.

Despite the abject nature of roads in the Okaikwei North constituency, no allocation was explicitly made by central government in the 2019 budget for the construction or rehabilitation of their roads.

With a total road network of 35 kilometers, Okaikwei North is now one of three newly created municipalities carved out of the Accra Metropolitan Assembly, to help accelerate development.

“We need our fair share of the national cake(as one of the 260 metropolitan, municipal and district assemblies in Ghana),” Richard Boahene, a resident of Transformer, a suburb in the constituency lamented.

More than a third of the total road network in the constituency is in a bad shape, with about 23 kilometers in a fairly good state but need various road maintenance works, Okaikwei North Municipal assembly has confirmed.

“Our colleague drivers at Container (a suburb) approached us so we organize a demonstration. However, we put it on hold because the Member of Parliament invited us and promised they would fix it. But the roads are just terrible, and people feel it’s all promises, no action,” Vice Chairman of the Ghana Private Road Transport Union branch at Lapaz, Richard Dogbey said.

In a bid to ease the stress of the about 50 commercial bus “trotro” drivers who operate from the Dome-Kwabenya and Asofa-Amasaman lorry station, four trucks load of laterite were purchased to re-gravel the unmotorable, pothole ridden 300 meter stretch leading to the station.

“We spent about 2,700 cedis of our merger funds to do that. But anytime it rains, the road even worse.” Richard Dogbey added.

A common theme among drivers engaged by GhanaFact in Okaikwei North is the cost of maintaining their vehicles due to the bad nature of the roads in the area.

“It’s been eight years driving on these terrible roads. And within this period, you can’t imagine how much I have wasted trying to fix my car due to the regular break downs,” Asare George, 39, driver of a Toyota Urvan bus “trotro” bemoaned.

Unfortunately, there is no readily available comprehensive data on how much it cost Ghanaian drivers in repairing their vehicles damaged by potholes in the past 12 months as compared to the UK.

According to the Okaikwei North Municipal assembly, they are aware of the bad nature of the roads in the constituency but are constrained due to financial limitations.

“We definitely need support from the Department of Urban and Feeder Roads and Ghana Highway Authority in taking up the construction of some of the road network in the municipality. But in the last two weeks we’ve intensified revenue mobilization and our task force is working hard to raise needed funds. We have resolved as an assembly to level (crush and resurface) some of the roads to make them at least motorable,” Municipal Chief Executive, Boye Laryea disclosed in an interview with GhanaFact.

He said constituents should be patient with the assembly as it exhausts the necessary due diligence and procurement process before signing off road contracts.

Other funding sources for road construction and maintenance apart from the annual budgetary allocation include the Ghana Road Fund, which is derived from a fuel levy, road and bridge tolls, and various road-related tariffs.

The World bank as part of its study said the Road Fund contribution to road maintenance does not cover the cost of sustainable maintenance and that the maintenance backlog is steadily increasing.

But Minister of Finance, Ken Ofori-Atta speaking on Citi TV’s program, Point of View on October 31, confirmed, “80 to 82% of the contractors will be paid” effective November 1.

While the struggle to fix Ghana’s roads continue, the country is ranked 78th in the world by the World Economic Forum, World Road Quality Country Rankings-2017/2018, compared to the UK’s 27th position.